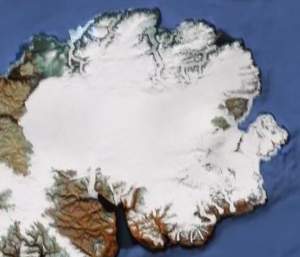 The Belcher Glacier above is the principal outlet glacier calving up to 30% of the total iceberg volume from the ice cap.
Devon Ice Cap’s negative balance has been due to warming and greater ablation, as the upper part of the glacier has seen some increase in accumulation, which has been more than offset by increased melting.

In this case the mass balance record indicates a dramatic worsening after 1995. It will be interesting to see the ablation results from the summer of 2008, when record melting was noted both in northern Greenland and northern Ellesmere Island. The glacier is not alone in its behavior, the Prince of Wales Icefield has had a negative mass balance over the last forty years of -80 km3, equivalent to a mean-specific mass balance across the ice field of -0.1 m w.e. a-1, contributes 0.20 mm to global eustatic sea level rise (Mair et at., 2008).
Photographs of the fieldwork coordinated by the University of Alberta