It is clear that the business model for glaciers in our current climate is not working. The Helm Glacier in the Coast Mountains of southwest British Columbia is an example of this.  Helm Glacier has been the focus of annual mass balance surveys since 1967. During the 1984-2013 period its mass balance losses have been the greatest of any of the 16 glaciers monitored in North America. The mass balance loss has been about 32 m of water equivalent, about 35 m of ice thickness lost. This is less than losses on other nearby glaciers like Spearhead Glacier but more than others such as Warren Glacier. The regional volume loss has impacted even the large glaciers Bridge Glacier and small glaciers. The loss is more than 30% of the Helm lost in just 25 years, and the trend mirrors that of all glaciers in the Pacific Northwest. Helm Glacier also fits into the pattern of glacier retreat across Canada, Canadian Glacier Retreat index. 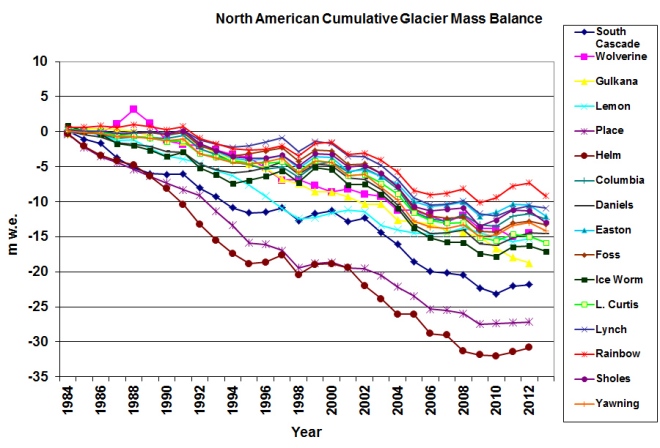 The glacier had an area of 4.3 square kilometers in 1928. Today the area has declined by 78% to 0.92 square kilometers. In 1928 the glacier is not too distant from its Little Ice Age moraines. The trimlines of recently deglaciated terrain are clear. The glacier has two termini, one draining north and the other west. Today in the picture from Johannes Koch, there is a vast expanse of newly deglaciated terrain that as yet lacks significant vegetation. The western terminus is gone.
Remainder of post and updates moved to
Helm Glacier