Gígjökull drains north from the Eyjafjallajökull Ice cap. Eyjafjallajokull began to erupt on March 20. In the initial eruption the fountains of lava were vented from a fissure in a relatively ice free area, east of the ice cap, and did not generate much flooding from ice melt. The vent indicated by NASA from early April has shifted closer to the main ice cap, but is still peripheral to it. The ash plume is also travelling east away from the still white ice cap on April 1.

In the renewed eruption on April 13-16, 2010 the eruption has shifted closer to the summit of the ice cap melting several holes in the glacier visible in radar imagery from the Icelandic Coast Guard. These are located at the crest and just south of the crest of Gígjökull. The glacier has not been vaporized, but has experienced considerable melt. 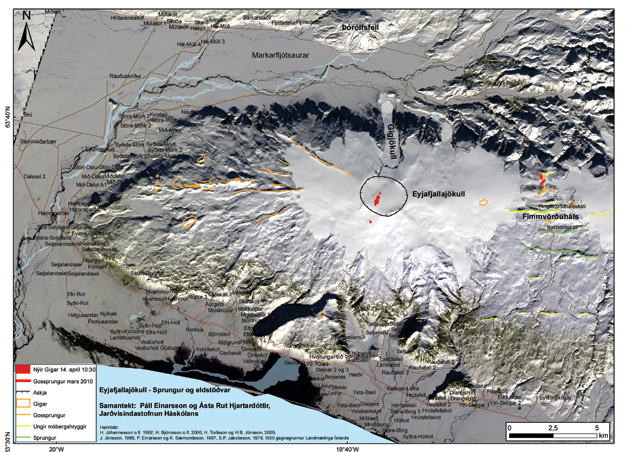 . The current eruption is close to the head of Gígjökull . Gígjökull is a 7.5 kilometer long glacier that empties out of the summit crater area at 1600 meters flowing across the ice cap plateau to 1500 meters then descending steeply in an icefall from the ice cap plateau to the terminus at 200 meters. There are pictures of lahars, Icelandic Met Service, from 4/16/2010 from just east of Gigjokull indicating this glacier is experiencing some substantial melt. The impact of the volcano will result in this glacier not being a good indicator of climate change impact on a glacier going forward, and will exacerbate the rapid recent retreat due to global warming. The Icelandic Met Office conducted a comparison of the runoff from glaciers draining the area around the volcano and from an ice cap in northeast and one in west Iceland indicate that the thick ash layer actually insulated the snow and ice underneath retarding glacier melt. Runoff in Jun-August 2010 a warm, dry period was just below normal in a gaged river draining the icecap near the volcano, and far above normal on ice caps farther from the volcano during summer 2010. Typically it takes a thickness of debris of 2 cm to switch from enhancing to retarding melting. The lahars visible in radar imagery on the 16th are mainly flowing to the south side of the ice cap. Contrast the series of images below from 4/17/2010 and 3/9/2010 from the Icelandic Met Office with the 2005 and 1992 images below. Below are the hydropgraphs from the Icelandic Met Office comparing the 2010 hydrograph of 2010 to those of 2006-2009, 2010 is the black year. 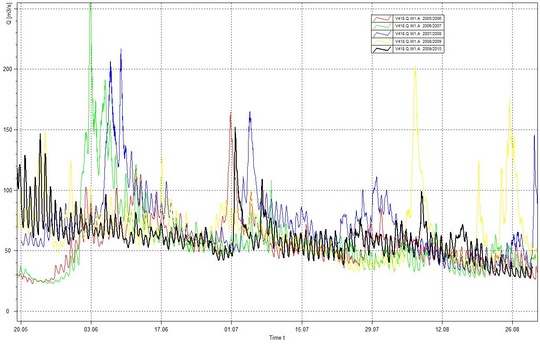 The climate induced retreat continued up to 2010 as the glacier lost its entire stagnant section adjacent to the lake. And now the lake has been filled in by mud in a matter of days. As of May 2nd the glacier still exists, many would think it had melted away completely, but glacier are tough to melt. The last image is from the Icelandic Institute of Earth Science (Sigrún Hreinsdóttir) 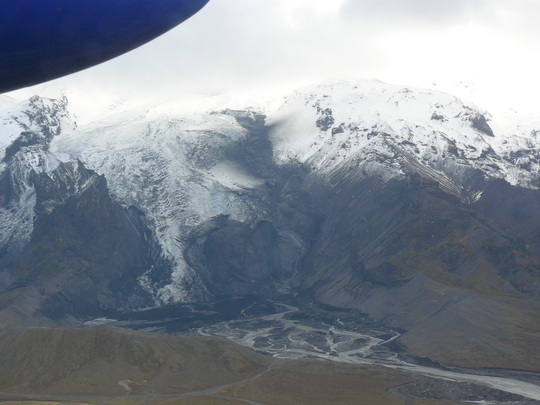 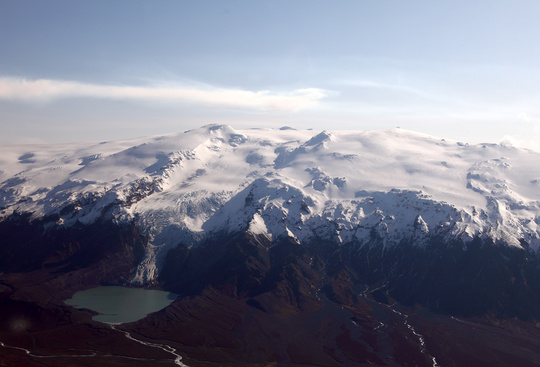 The image above is from Tómas Jóhannesson, Icelandic Meteorologic Office, and shows that in 1992 there is no indication of stagnation and breakup in the proglacial lake at the teriminus. In addition compare the width of the glacier in that base of the icefall region. In 2005 the large exposed bedrock region is evident, in 1992 it is an active crevassed glacier across this entire region. Given the thickness of the glacier 100-200 meters in this region, this is a very rapid change in thickness. The glacier retreated in the first half of the 20th century but then began an advance that lasted until 1997. From 1997-2005 the glacier has retreated 700 meters according to data reported to the World Glacier Monitoring Service. This is leading to the expansion of the proglacial lake. The current rate of retreat is nearly 100 meters per year. The lower 1.1 kilometers is stagnant and poised for further fairly rapid retreat. The glacier is several hundred meters thick in this region and would melt slowly in place, but can breakup quickly via calving in the proglacial lake at its terminus. How far will this sub glacial trough extend upglacier from the current terminus will be key to understanding how fast this will occur. The view across the lake and a section of the terminus area that was breaking up in 2004 resulting in a retreat of 370 meters from 2003-2005 is seen in the image below from Ó. Ingólfsson

Note that in the image above and below. The lower 1.1 kilometers of the glacier lack crevassing and further has as its upglacier end a large bedrock area that is exposed across half the width of the glacier. this indicates the lack of flow from the icefall region of the glacier into the stagnant terminus zone. 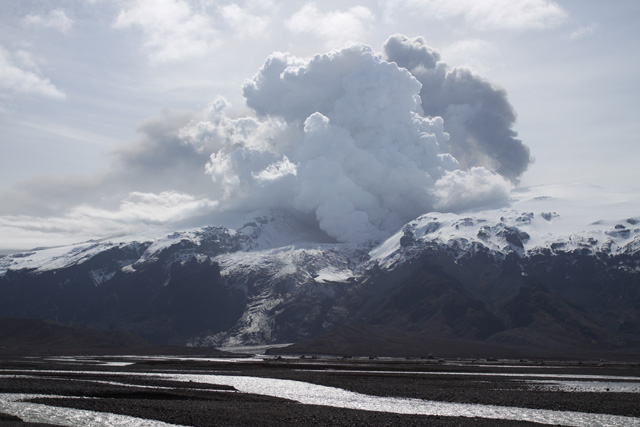