The Brooks Range of Alaska contains many alpine glaciers. You hear little about them as there are no large ones and none that can be seen from a cruise ship as in southern Alaska. Though I have worked on many Alaskan glaciers for extended periods, it has always been in southeast Alaska on the larger Juneau Icefield. Hey one month until my 30th field season. The climate is much different as well, with the Arctic Ocean instead of the Pacific Ocean having a more dominant role. The Beaufort Sea Gyre is the nearest major ocean current feature. The Okpilak Glacier drains into the Arctic Ocean and is a large glacier by Brooks Range standards. Matt Nolan at the University of Alaska-Fairbanks has done a beautiful of duplicating a picture taken by Ernest Leffingwell in 1906 with pictures he has taken in 1994, 2004 and 2007. Below is the 1906 picture and the 1994 image, and the 2006 Google Earth view of the glacier. The large retreat is evident, the lateral moraine from the Little Ice Age today stands high above the glacier on the mountain side. 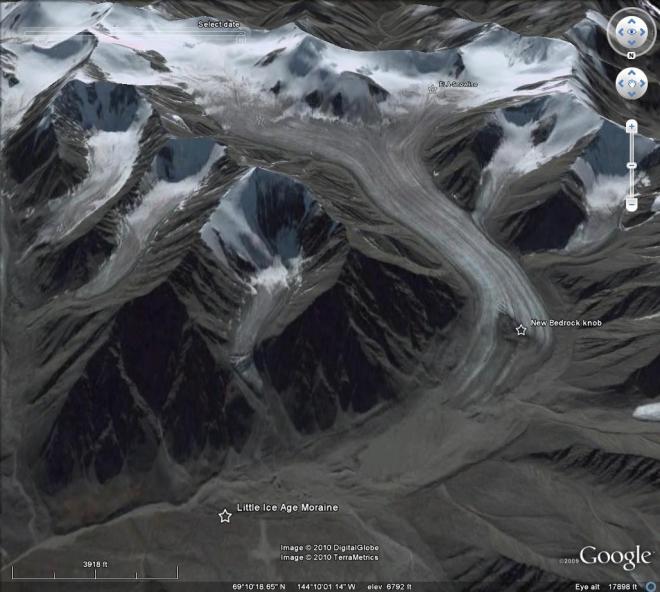 The glacier was still near its Little Ice Age maximum when Leffingwell took his picture. By 2006 the glacier had retreated just over 2 kilometers, note the Little Ice age moraine in the Okpilak Glacier image from Google Earth. There is a bedrock knob apparent in both the 1994 and 2006 image, though the ice thickness around the knob is much reduced by 2006. Also the lake at the end of the glacier in 1994 is quickly filling in with glacier sediment and by 2006 is not as prominent. Bernhard Rabus and Keith Echelmeyer-Univ. Alaska-Fairbanks had reported in 1998 that this glacier had retreated 420 meters between 1973 and 1993, 5% of its length and a rate of 20 meters per year. This is larger than the rate of 6-7 meters per year from 1907 and 1958 reported by Ed Sable, who photographed and surveyed the glacier in 1958. The rate of retreat has remained rapid. The 2006 image illustrates the problem, the ELA-snowline is too high and leaves only a small percentage of the glacier snowcovered at the end of the summer. This has been the pattern in recent decades and has led to a loss in average thickness of 30-40 cm per year. This loss though it is in a different climate region is remarkably similar to the losses observed on Lemon Creek Glacier. A view of the terminus of the glacier in 2006 from Google Earth indicates a bedrock knob that is 800 meters upglacier of the terminus.

Below this knob there is little crevassing, the ice is thin, both suggesting stagnation and that this section of the glacier will soon be lost. As the sea ice to the north diminishes this area will be interesting to observe, as the potential is there for increased snowfall, while the open water will clearly lead to more warming as well.