Bear Glacier in the Kenai Mountains of Alaska is a 25 km long outlet glacier of the Harding Icefield. When first mapped in 1909 it had a large piedmont lobe filling a basin and terminated 400 m from the edge of the forest, though it appeared the retreat had been quite recent within 25 years. By 1950 the glacier had retreated another 400 m. Austin Post observed in the 1960’s the drainage of a lake seven kilometers upglacier from the terminus indicating that slow thinning was occurring in the entire lower section of the glacier. The piedmont lobe slowly downwasted through the 20th century preconditioning the glacier for a rapid retreat. The repeat photographs of Bruce Molnia, USGS portray this spectacular change.

By 1980 the terminus had retreated 1 km, thinned by 150 m, and was calving small icebergs into an ice-marginal lake that was beginning to develop in the still narrow basin. As thinning continued, much of the terminus became afloat by 2000. Bruce Molnia, USGS observed that passive calving, characterized by the release of large tabular icebergs from Bear’s low gradient, floating terminus became frequent. Between 2000 and 2007, the terminus retreated about 3.5 km, yielding large icebergs that floated in the lake. The first image is from Google Earth the second taken by Bruce Molnia in 2002 followed by GoogleEarth images from 2005 and 2011. The terminus position in 2005 is in green and 2011 in red, retreat was 400 m during this six year period. The last image is a Landsat image from 8/3/2012 and indicates continued retreat along the east margin and expansion of the length of the calving front. The amount of calving has declined from the period of more rapid retreat from 2002-2008. 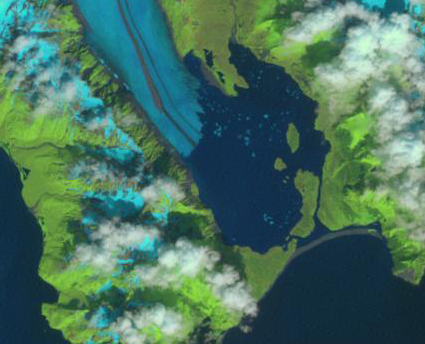 An examination of the expanding lake identified locations with depths exceeding 75 meters. Retreat indicates the response of the terminus region of a glacier to climate in this case long term downwasting, but does not reflect how healthy the higher regions of the glacier are. How does the large 150-200 m of thinning in the terminus region compare to further upglacier? The U of Alaska-Fairbanks established a program of laser altimetry examining thickness changes along the Bear Glacier that have been reported by A.Arendt, K.Echelmeyer and C.Larson. 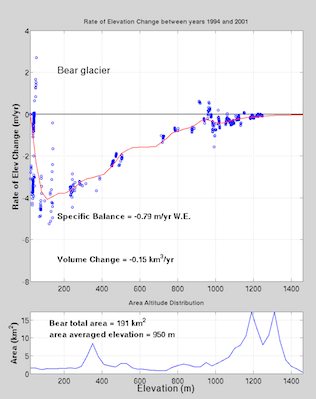 The graphs of the last decade of change indicate that little thinning has occurred above meters since 2007. In a satellite image of the region of the glacier from 2500-3500 feet, a small rock island (nunatak) generates a consistent and long term lateral moraine. in the lower center of the image below

The size of the moraine and the size of this nunatak have not changed appreciably in the last decade, suggesting limited thinning in the region above 2700 feet. The accumulation zone of this glacier remains sizable, but insufficient to supply a large piedmont lobe-now gone, or a calving terminus. This is not unlike the retreat of the Gilkey Glacier, Norris Glacier or Field Glacier of the Juneau Icefield. In the St. Elias range Yakutat Glacier is another example.