Castle Creek Glacier is in the Cariboo Mts. of British Columbia. The glacier descends north-northeast for 6.3 km from 2825 meters to the terminus at 1,810 meters. During the last 50 years of retreat has left a series of annual terminal recessional moraines that indicate how much the glacier has retreated each year. The glacier has a remarkably uniform and relatively low slope for an alpine glacier. This is one feature that helps ensure that the retreat rate changes little from year to year as the glacier flow dynamics are consistent. There is no prominent icefall, there is no low slope terminus tongue that can stagnate. The extent of the glacier during the Little Ice Age is quite evident as the gray vegetation free zone.

Castle Creek Glacier has receded every years since 1959 at total of 720 meters up to 2008, about 14 meters per year. The Universtiy of Northern Brictish Columbia as part of the Western Canadian Cryosphere Network has undertaken a detailed investigation of this glacier. Matt Beedle at UNBC has been the field leader for the project, and has had the chance to map and identify the annual recessional moraines. The three pictures below are from Matt Beedle. The first is a series of aerial photographs that have been cropped to show the same area. Note that in 1946 the glacier filled the view, by 2005 it barely makes the image. The period from 1971 to 1991 has the most notable recessional moraine ridges. Beyond the 1967 margin there are at least 10 moraine ridges 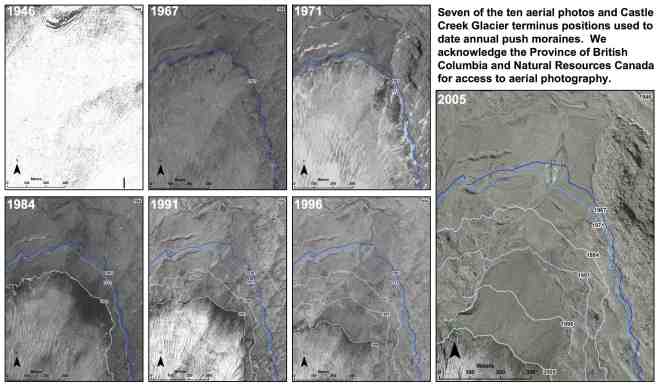 The recessional terminal moraines are not unusual features to be formed by a retreating glacier, however they are unusual to be formed each year and to be so well preserved. The recessional moraines are deposited on a till plain exposed by the glacier retreat. Often such moraines are ice cored and tend to disappear as the ice core melt outs, not the case here. The moraines form during the winter when the glacier continues to move and the terminus is not melting. In summer after the terminus area is exposed the terminus melts back. The Key as pointed out by Matt Beedle is summer temperature. Such moraines will not form on a glacier with a stagnant glacier tongue. Such moraines also do not form on glaciers that have a terminus area that is an avalanche runout zone that can bury the terminus some years.

The glacier fits the pattern of glaciers throughout the southern interior ranges of BritishColumbia and Alberta which Blch et al (2010) noted lost 11% and 25% of their area over the period 1985–2005 respectively.