One of the glaciers draining north from Theri Kang in Bhutan terminates in proglacial lake, that is a lake at the glacier front. This is an unnamed glaciers like its neighbors, we will refer to it as the Theri Kang Glacier. The glacier has retreated 1700 meters from the moraine complex that impound the lake. The terminus is at 5200 meters, the snowline is at 5800 meters and the summit of the glacier is near 6700 meters. The vegetation adjacent to the glacier is indicative of the overall dry climate in the region. This is also a cold climate with permafrost in the areas adjacent to the glacier. The lake is not in evidence in maps of the region from the 1960’s.

Kääb (2005) in Figure 7b examined the velocity of this glacier using ASTER imagery he found that most of the lower glacier extending from where the tributaries join to the terminus moved at a velocity of 50 m per year. A comparison of this 2001 image overlain in Google Earth and the more recent 2009 imagery indicate this glacier has retreated 300 meters in eight years. The 2001 image is from NASA.The red line in the 2001 image indicates the 2009 terminus. 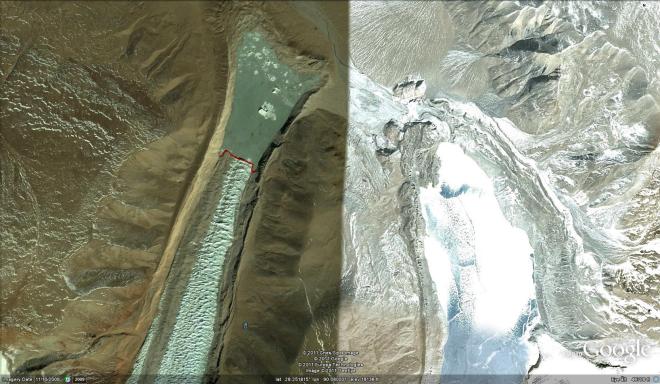 The lake has expanded from 1500 meters in length to 1800 meters and now encompasses nearly 2 square kilometers. Often there is concern about glacier lake outburst floods from lakes dammed either by a glacier or impounded, as in this case, by its moraine. For the Theri Kang the moraine complex appears quite wide, and stable and is not of great concern. The 2013 Landsat image does not show significant retreat after 2009.

2013 Landsat Image
The lower portion of the glacier is debris covered along the lateral margins, but the clean ice portion has an interesting pattern, that is typical of a glacier in a drier climate where sublimation is an important element of the ablation process, dominating over melting. Sublimation is the direct transfer of solid ice to water vapor without melting. That is the crevasse pattern becomes a series of prominent crests almost waves that persists in the absence of the crevasses that formed them. This persistence would not occur in a zone dominated by melting.

Though the setting is much different the response to climate is the same as almost all Himalayan glaciers from the Zemu Glacier in Sikkim, to Lugge Glacier, Bhutan, to Imja Glacier in Nepal