Quelccaya Ice Cap is in the of Peru. The first detailed investigations were by Lonnie Thompson at Ohio State examining the ice cap for its potential for ice coring (Thompson, 1980). Three decades later he is still involved in research on this ice cap and others, which combined have yielded one of the finest glacier climate records we have. This is nicely chronicled in Thin Ice by Mark Bowen. This research generated an excellent ice core record, that has annual resolution back some 1000 years, that illustrated the global nature of the Little Ice Age (Thompson et al, 1986). This core also indicated the reduced accumulation during El Nino events Thompson et al (1984) In conducting this research Thompson et al (2011) Figure 8, has also chronicled the retreat of one outlet glacier the Qori Kalis and put this in context with other tropical glaciers.

The retreat of this glacier had been 1300 meters from 1963-2005. Today the University of Massachusetts, Climate System Research Center has installed weather stations on the glacier. Recent fieldwork has also focussed on ablation, accumulation and energy balance measurements, this is nicely chronicled in photographs by Carsten Braun, slideshow bottom of linked page Westfield State University. This post will focus on the development of new proglacial lakes at the terminus of the Quelccaya Ice Cap southwest of Qori Kalis and on the retreat of the ice cap from several lakes that had been in contact with the terminus. Landsat imagery from 1991 and 2010 is used. Point A is Qori Kalis, Point B, C and D are separate termini. 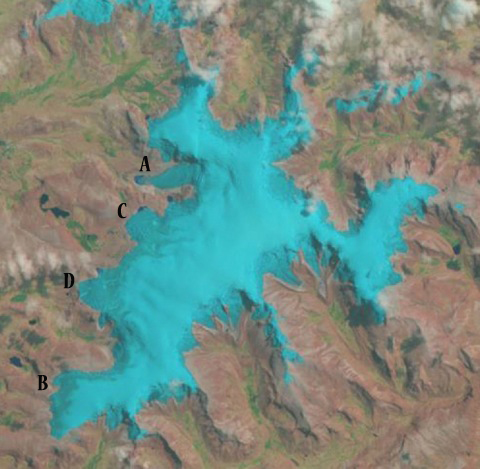 We see several new proglacial lakes indicated by blue arrows and two lakes that were in contact with the ice cap in 1991, but now are not, red arrows.

Qori Kalis (point A) has retreated out of its proglacial lake. The glacier filled this lake in 1963, the lake is now 1300 meters long and the glacier is 1450 meters from the northwest end of the lake, this represents its retreat over the last half century. The next lake indicated by a red arrow south of Point A. was in contact with the ice cap in 1991 it is now 200-250 meters from the ice cap edge. The next lake to the south indicated by a red arrow is was also in contact with the ice cap in 1991 and is now 250 meters from the ice cap margin. Points B,C, and D point two newly formed lakes filling basins exposed by glacier retreat since 1991. The distance from the far edge of each lake to the current ice cap margin indicate retreat of 300 m at C, 400 m at D and 250 meters at B.