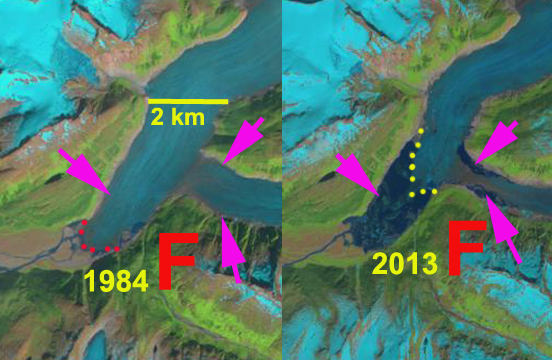 Above is a paired Landsat image from 1984 left and 2013 right, indicating a 2300 m retreat in this period, below is further detailed examination.
The Field Glacier flows from the northwest side of the Juneau Icefield, and is named for Alaskan glaciologist and American Geographical Society leader William O. Field. Bill also helped initiate the Juneau Icefield Research Program, which Maynard Miller then ably managed for more than 50 years. The JIRP program is still thriving today. In 1981, as a part of JIRP, I had my first experience on this glacier. It was early August and there was new snowfall everyday that week. Jabe Blumenthal, Dan Byrne and myself undertook a ski journey to examine the geology on several of the exposed ridges and peaks, note the burgundy line and X’s on image above. This was truly a remote area. The glacier begins from the high ice region above 1800 meters, there are several icefalls near the snowline at 1350 meters, and then it descends the valley ending at 100 meters. The runoff descends the Lace River into Berners Bay.

This post focuses on the significant changes occurring at the front of the Field Glacier. The development of a proglacial lake at the terminus is accelerating and spreading into the main southern tributary of the glacier. This lake is going to quickly expand and develop a second arm in that valley. The USGS map from 1948 imagery and the 1984 imagery indicate little change in the terminus position, with only a small lake at the terminus. 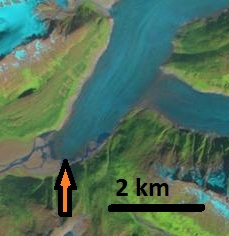 . After 1984 the mass balance of the Juneau Icefield became more negative, this was apparent from the rise in the snowline elevation on all the glaciers and by the increasing losses and resultant thinning typified by the Lemon Creek Glacier (Miller and Pelto, 1999) 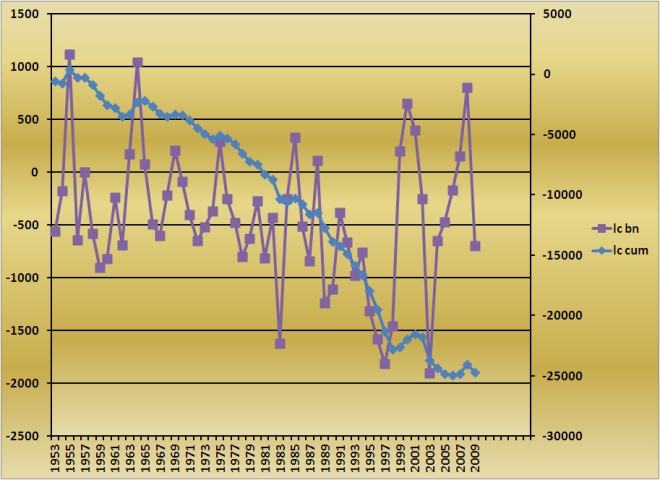 . The Field Glacier by 2006 had developed a proglacial lake at the terminus that averaged 1.6 km in length, with the east side being longer. There are several small incipient lakes forming at the margin of the glacier above the main lake, each lake indicated by black and orange arrow. In 2009 the lake had expanded to 2.0 km long and was beginning to incorporate the incipient lake on the west side of the main glacier tongue. By 2011 the main lake has nearly reached the southern tributary lakes. The lake has expanded to 2.6 km long, with the west side having caught up with the east side, and an area of 4.0 square kilometers. In addition the main lake has joined with the fringing lake on the south side of the south tributary. There is also a lake on the north side of this tributary. This lake should soon fill the valley of the south tributary and fully merge with the main, as yet unnamed lake at the terminus, maybe this should be Field Lake. Below in order is the 2006, 2009 and 2011 Landsat images. 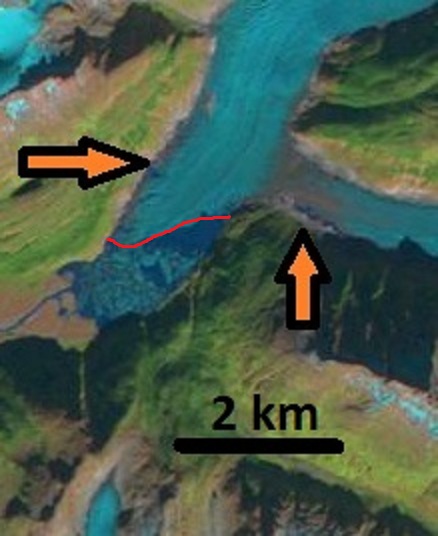 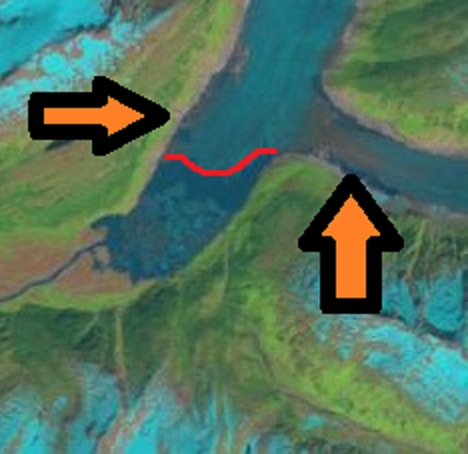 This glacier is experiencing retreat and lake expansion like several other glaciers in the icefield, Gilkey Glacier, Eagle Glacier, and Antler Glacier.