Vega Island is a heavily glaciated island just east of the northernmost section of the Antarctic Peninsula (map from Davies et al, 2010 Aberystwyth University). The mass balance of Bahia Del Diablo Glacier (BDD green arrow) located on this island has been monitored by an Argentina research group since 1999/2000 (Skvarca et al 2004 and WGMS, 2010). Nine of these ten years have seen negative mass balances, four substantial losses. The glacier begins at 600 meters and ends at 100 m, with an ELA of 425 meters on average, an image from Pedro Skvarca of Bahia Del Diablo indicates the ice cap nature of the glaciers on Vega Island.

Eight kilometers west of Bahia Del Diablo is are three adjacent glaciers at the northwest corner of the island (NW: burgundy Arrow on Vega Map) that is the focus here. In the initial glacier inventory these were listed as glacier 02-04 on Vega Island (Rabassa et al, 1982) This glacier barely reaches to the ocean, but the amount of bare land exposed at the coast along the glacier front is increasing. Further during several recent years this glacier has lost all of its snowcover. This glacier has only a tiny bit of its total area above 400 meters, below the observed ELA of the last decade on Bahia del Diablo. This is an issue for a couple of adjacent glaciers as well. Note the 1999 Google Earth imagery and the Landsat imagery from 2000 that indicate the lack of snowcover, green arrows. In 1999 and 2000 the glacier reached the coast along a distance of 900 meters, red arrows in second image. Note the change in the size of the bedrock exposed near the terminus, burgundy arrow from 1999 to 2011. The glacier frontage by 2011 had been reduced to 250 meters, the bare brown red areas have nearly merged along the coast, soon this glacier will not be reaching the shoreline. The bare rock area between two lobes of the glacier has also expanded, from 1999-2011, burgundy arrows. In 2007 and 2008 there was very little if any snowpack left on this glacier by the end of the melt season. The issue for a glacier without a consistent accumulation zone, is that it will not survive (Pelto, 2010). These glaciers are more like ice caps are not thin and are not melting away quickly. The glacier volume loss is consistent with that observed all around the Antarctic Peninsula, Nordenskjold Coast 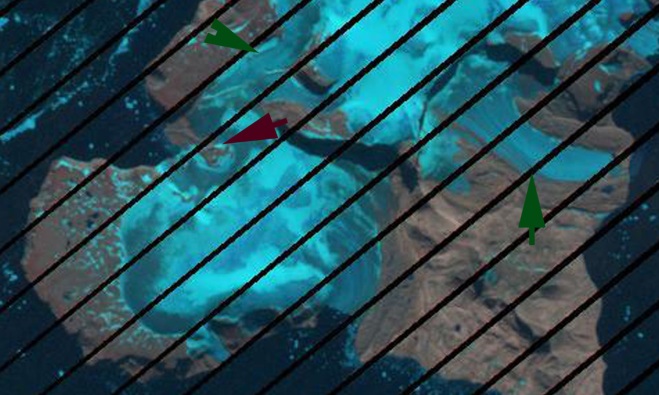