In the early 20th century Valdez Glacier descended onto a glacial outwash plain that the city of Valdez, Alaska is built upon. Today the glacier has retreated into a mountain valley and is calving into an expanding lake. David Arnold in the Double Exposure project documenting climate change photographically has a pair of images from 1938 and 2007 of the glacier. This post examines Landsat and Ikonos images from 1987, 2001, 2005, 2007 and 2011 to document this retreat. The 1948 map of the glacier indicates no lake at the terminus of the glacier, and the braided glacier emanating from the end of the glacier still building the outwash plain, note airport just sw of terminus on plain. 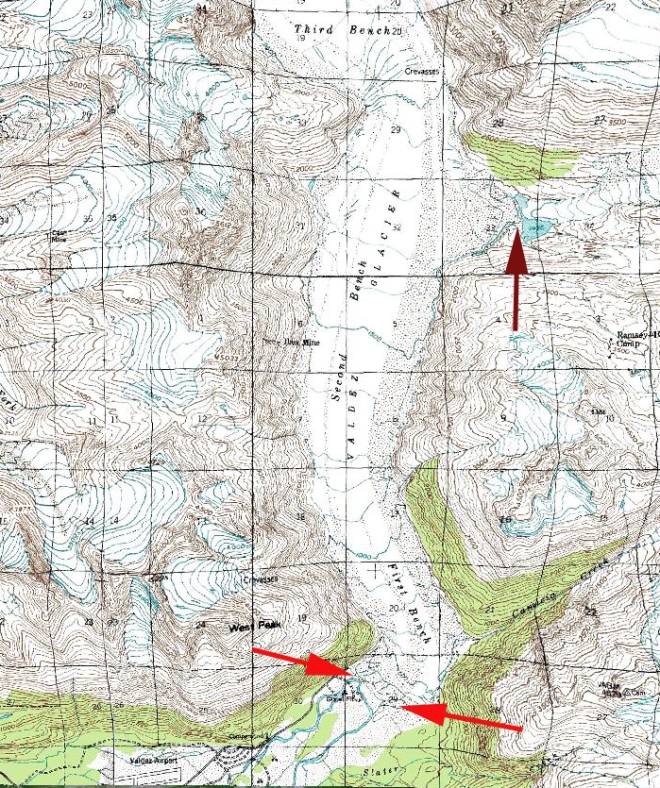 The terminus on each image is indicated in light red. Seven kilometers upglacier of the terminus is a secondary terminus in a side valley. In the 1948 map this terminus also joins the glacier descending the same valley, dark red arrow. With time both glacier termini retreat. By 1987 Landsat imagery indicates the development of a lake at the terminus and that the outwash plain is stabilizing, as indicated by complete vegetation development. By 2001 the west side of the lake is 1.5 from north to south, the east side still extends to the southern shore of the lake. By 2005 the eastern side of the terminus has collapsed and the terminus has retreated 1500 meters from the lakes southern shore. In 2007 Google Earth imagery the lakes is 1700 meters wide, and by 2011 the lake is 2 kilometers from north to south. The images below in order are Landsat 1987, Landsat 2001. Ikonos 2001, Ikonos 2005. Google Earth 2007 and Landsat 2011. 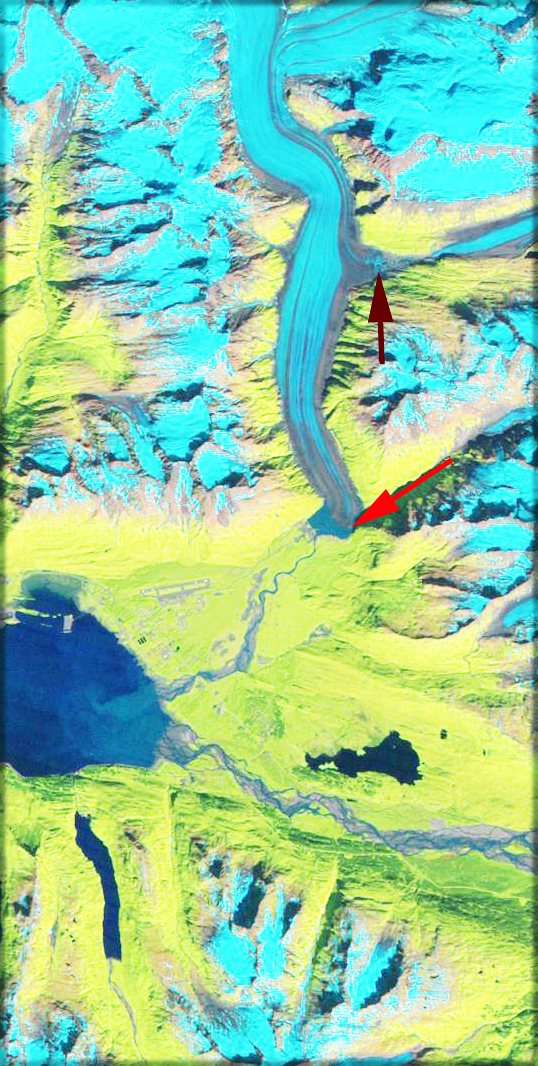 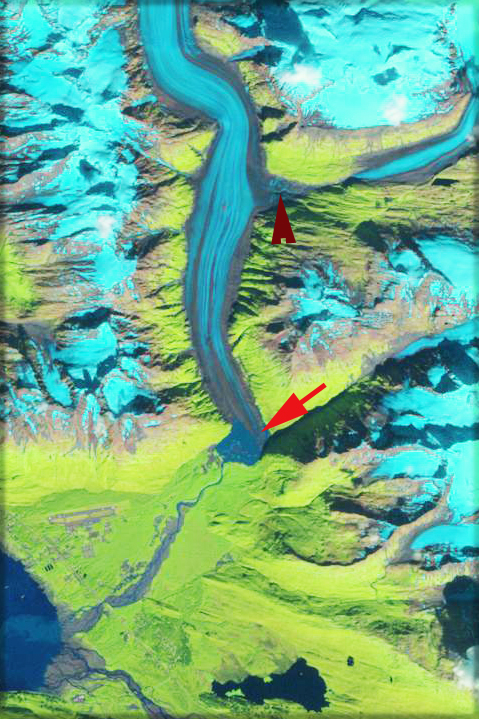 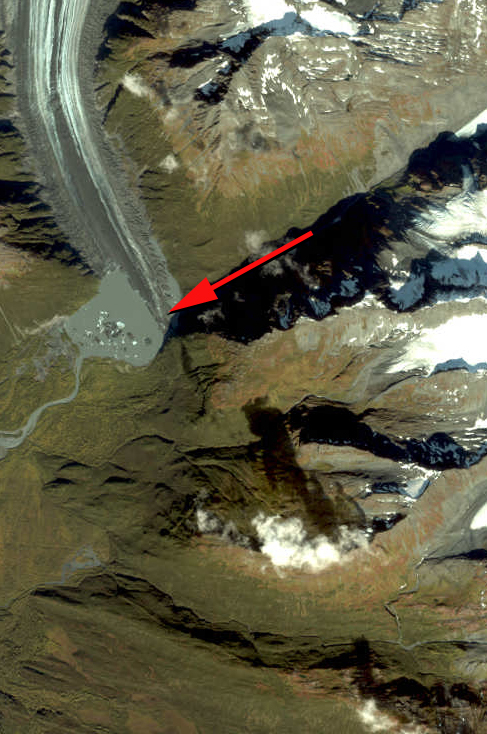 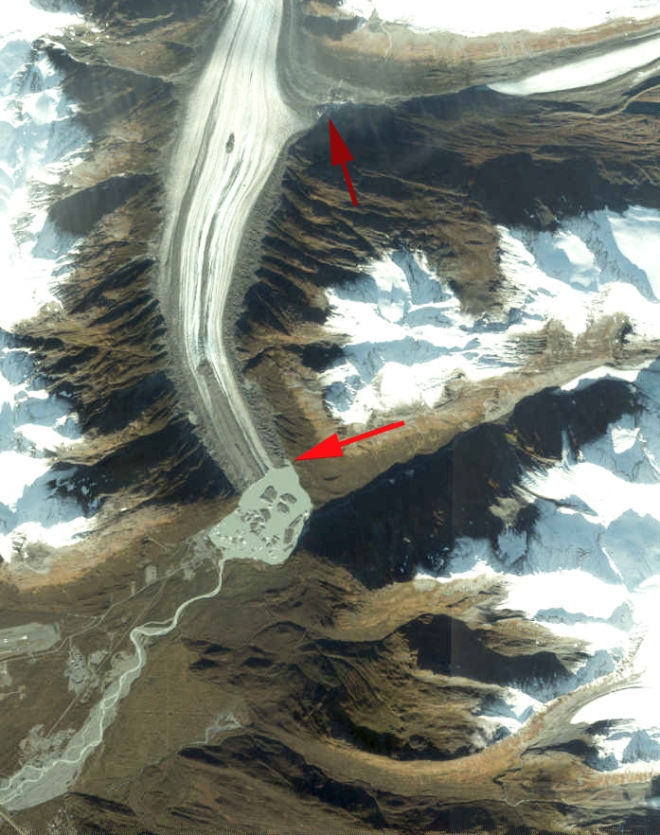 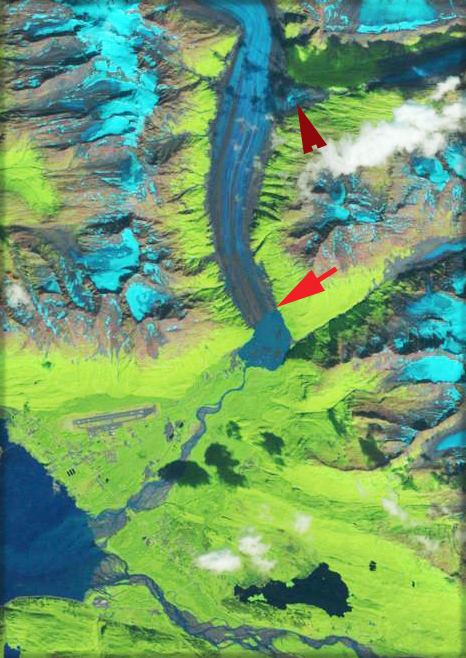 . In the 2007 image the orange line is the map terminus and the red line is the 2007 terminus indicating a retreat of 1800 meters.
The upper terminus dark red arrow is separated by three kilometers from the glacier descending the valley and now barely enters this side valley. This indicates upglacier thinning that will lead to continued retreat. Valdez Glacier is retreating mostly due to surface melt and thinning and to a lesser extent calving. The lake is not as deep nor the calving as rapid as other area glaciers Yakutat Glacier, Melbern Glacier and Grand Plateau Glacier