The glaciers of northern Novaya Zemlya, Russia are truly generally out of sight out of mine. There remoteness and lack of importance as a water resource being the key reasons. A recent study by LEGOS (Laboratoire D’Eetudes en Geophysicque et Oceanographie Spatiales) in France highlights the changes of these glaciers from 1990-2000. It seems particularly important to pay attention to these glaciers due to the recent changes in sea ice cover that have left a much longer duration of open water around the island particularly to the west in the Barents Sea. This has been beautifully illustrated in a post at Arctic Sea Ice Blog this week.

. Here we focus on two glaciers, Nitzky and Glasova on the west coast of the island that LEGOS identified as losing 1.2 and 1.4 square kilometers in area from 1990-2000 LEGOS (Alexei Kouarev, Frédérique Rémy and Benoit Legresy) a. Here we compare a Landsat image from 1988 and 2009.

The northern glacier of the two is Glazova, the burgundy arrows and dots indicate the terminus in 1988. In the 2009 image the terminus is orange dots. Glazova Glacier has retreated 1500 meters. The Nizkiy Glacier has several termini in lakes and one in the Barents Sea. Along the northern margin inland of the terminus in 1988 the green arrow indicates a proglacial lake, trapped by the glacier. In 2009 the lake has drained, green arrow and the green dots indicate the path by which the lake drained. Marginal retreat of 500 meters opened up a passage for drainage. The main terminus juts north out beyond the end of a peninsula, by 2009 the terminus has retreated 1000-1500 meters enough to leave this terminus exposed, note the burgundy dots on both images. The middle terminus ends in a proglacial lake and in 1988 the terminus largely envelops an island, yellow arrow. By 2009 the glacier has exposed almost all of this island a 1000 meter retreat. The southernmost terminus shown is indicated by a black arrow. In 1988 the piedmont lobe of this glacier almost completely fills the lake basin. In 2009 the lake basin is half exposed by glacier retreat, this is a 1500 meter retreat. The very map of the region is changing. Below is the 1988 and then 2009 image. After we will zoom in and further discuss the changes on Nizkiy Glacier. 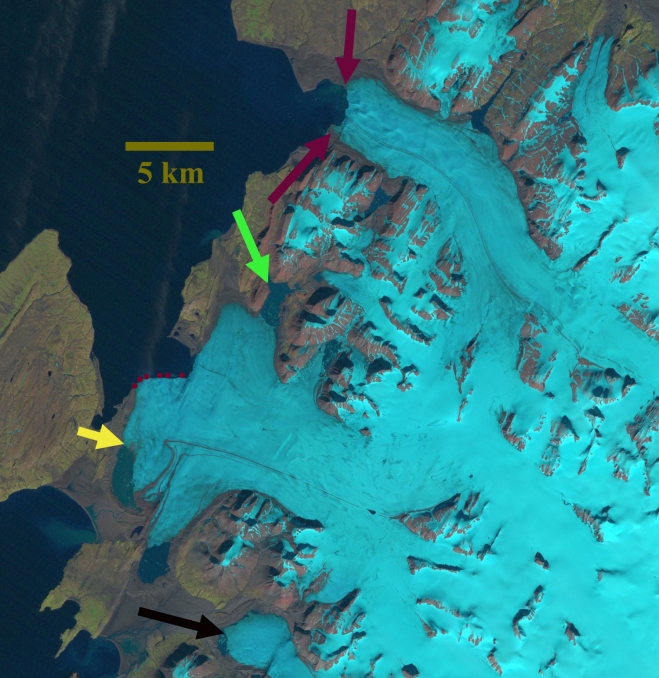 .
The yellow arrow indicates the new island forming in the proglacial lake, burgundy arrow indicates the peninsula that the main marine terminus extended beyond in 1988 and the green arrow indicates the edge of the valley through which the formerly trapped lake could drain. It will likely be quite soon when the proglacial lake with the island joins with the Barents Sea. This region has quite limited Landsat imagery making it hard to determine how much retreat occurred in 2011. The last image is a MODIS image from 8/31/2011, where the burgundy arrow indicates the peninsula at the end of Nizkiy Glacier. This retreat fits the pattern of retreat and changes in geography from retreat further NE in Novaya Zemlya at Roze and Sredniy Glacier and elsewhere on the northwest coast, Krivosheina Glacier. 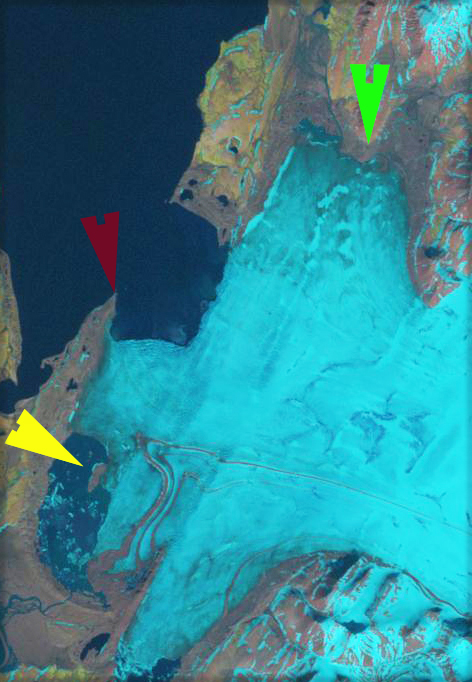 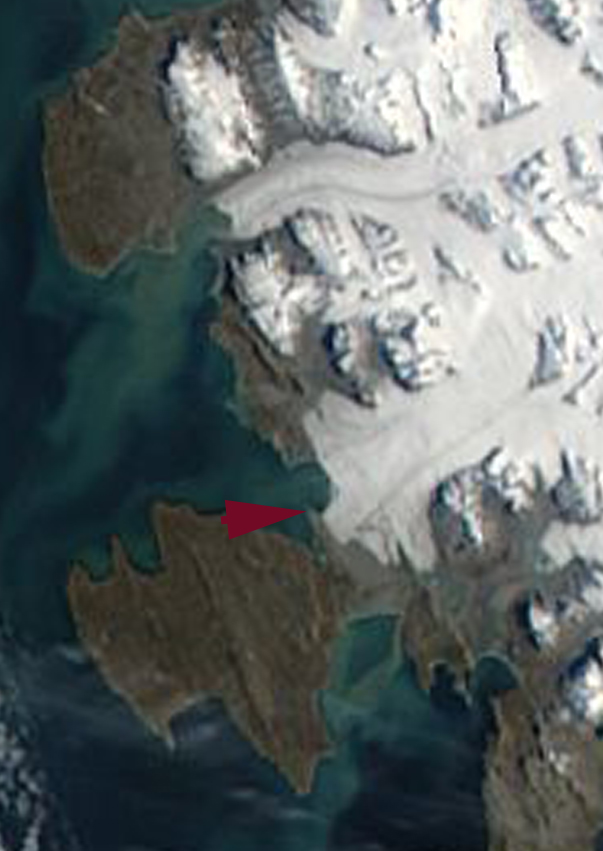