C.E. Rusk in 1906 hiked right to the terminus of Suiattle Glacier, which is labelled Lion’s Paw in Rusk (1924). The glacier had retreated 1400 m since its Little Ice Age maximum and based on the lack of reported brush below the glacier, this retreat had occurred primarily in the previous 30 years. By 1940 the glacier had retreated another 900 m back to within 120 m of its current position. Suiattle Glacier retreated more from its LIA maximum than any other glacier in the area, probably due to the low slope of the Suiattle Valley, from 1550-1700 m, down which the glacier had advanced. Rusk, noted the lack of any terminal moraine near the end of this glacier, this was unusual in his experience. In other words typically in this period a terminal moraine was not too distant from the current termini position. This glacier had already retreated so far that the terminal moraine was not only well down valley, but buried by aggrading sediments from the glacial stream. This retreat continued until 1967, below is a 1967 photograph of the glacier from Austin Post (USGS).

Between 1967 and 1979 Suiattle Glacier stopped retreating and began a small advance. Suiattle Glacier advanced 15-20 m during the 1970’s. Our visit in 1988 to the glacier indicated retreat had just begun, and by 1995 the glacier had retreated only 28 m from 1988 to 1995 (top image). The retreat than accelerated with another 150 m of retreat by by our 2002 survey. The terminus remained crevassed steep and convex through 1995 forcing us to the eastern margin to reach the terminus. By 2002 (second and third image) the terminus was no longer that steep or crevassed and we could walk right down the middle. 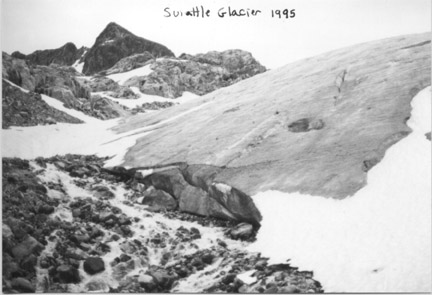 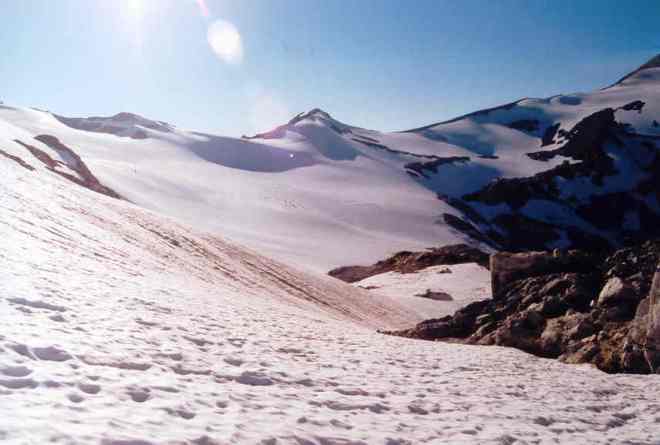 What is a more important reflection of the is glaciers current state is the thinning that is apparent. Outcrops of rock are emerging as the glacier thins even well above the terminus (A-E). The majority of the outcrops are on the eastern side of the glacier. Even after a year of good positive mass balance for the glaciers in 2011, the outcrops remain exposed. The upper portion of the glacier appears robust still. Unlike its counterpart over the glacier gap on its western margin where the west arm of the Whitechuck Glacier melted away. 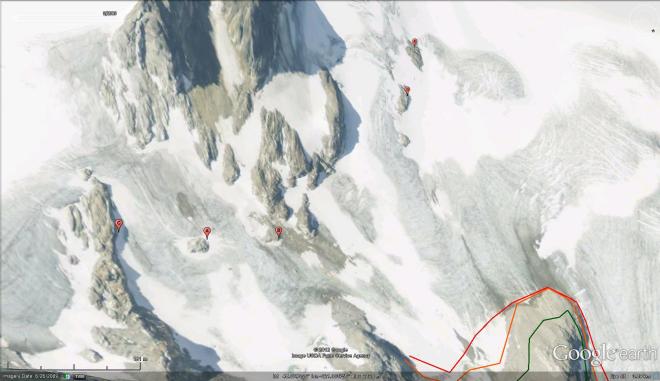 On Suiattle Glacier in 2002 we undertook a detailed ice worm study, setting up six square meter plots and counting the ice worms. The recorded mean density was 1800 to 2600 ice worms per square meter in 2002. With an area of 2.7 square kilometers, this represents 5-7 BILLION ice worms on this glacier! This is comparable to the earth’s entire human population on just one glacier. Good thing they do not use many natural resources each. This is also the highest population we have identified in the North Cascades. The picture below is from this survey, the quality is tough because they only come out in low light and this was prior to having a digital camera.