Des Poilus Glacier, British Columbia is at the southwest corner of the Wapta Icefield in Yoho National Park. The glacier flow south at a relatively low slope from the slopes of Mt. Des Poilus. The glacier retreated 500 m, a rate of 15-18 m/year, from 1950-1980. 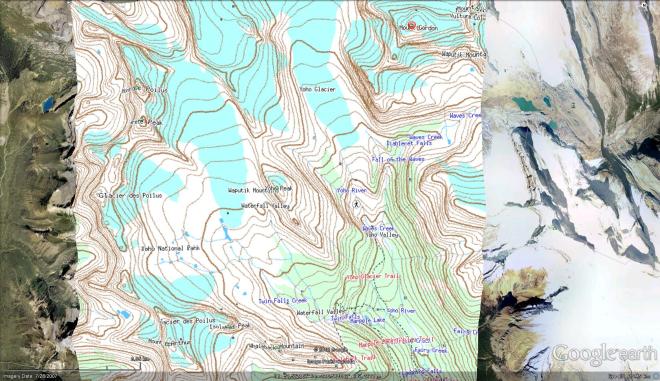 In this post we examine the continued retreat and development of a new lake at the terminus of the glacier using Landsat imagery from 1988, 2001 and 2012. In 1988 no lake exist at the terminus, red arrrow. The glacier extends well past the prominent ridge on the east side of the glacier shortly above the terminus, yellow arrow. The blue arrow indicates that the snowline is very high 2650 m, which is 200 m higher than that necessary for the glacier to be in equilibrium. By 2001 a small lake had developed along the west side of the glacier and the glacier had retreated 300 meters from 1988. By 2012 a substantial lake has developed that is 600 m long and 500 m wide. The glacier has retreated beyond the prominent ridge east of the glacier, yellow arrow. Total retreat from 1988 is 800 meters and 450-500 meters since 2001. The retreat rate since 1988 has increased to 25-30 m/year since 1988. The snowline despite this being an Aug. 12th image is already at 2600 meters. The issue for this glacier is that the consistent snowline is too high to support the main valley tongue of the Des Poilus Glacier, which will dissappear (Pelto, 2010). The only section of the glacier that maintains snowcover is on the east flank of slopes of Mt. Des Poilus. 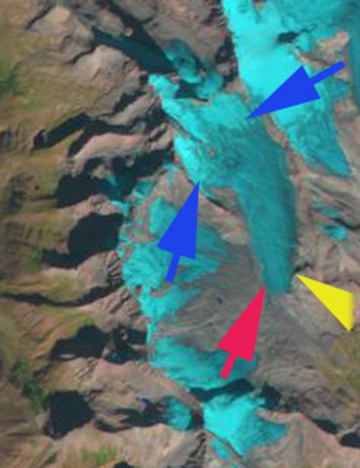 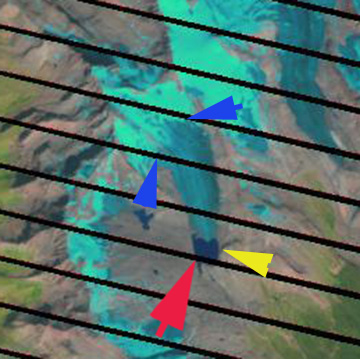 This retreat has followed the pattern for glaciers in the area overall (Bolch et al, 2009) from Freshfield Glacier, Columbia Glacierand Washmawapta Glacier.