The Malana Glacier (top image) is at the headwaters of the Malana River in the Himachal Pradesh of India. The glacier feeds the Malana Hydropower Plant (second image) a 108 MW run of river hydropower plant, that lacks a significant reservoir. The Malana River than flows into the Parbati and Beas River. Malana Glacier runoff once in the Beas River feeds hydropower facilities at Larji (120MW: third image), which alters streamflow below it leaving the river bed quite exposed at times (fourth image), Pandoh (990MW) and Pong (360 MW). The Pandoh Dam diverts water out of the basin into the Sutlej System to generate the power, see Sara Umaga Glacier retreat for details. The Malana Valley is very secluded and is sometimes referred to as the Shangri-la. This glacier differs from many of the glaciers in the region that have a heavily debris covered terminus such as the Gangotri or Satopanth. The retreat is similar to that of all glaciers in the region (Kulkarni et al, 2007). and in the high mountains of Asia except the Karokoram 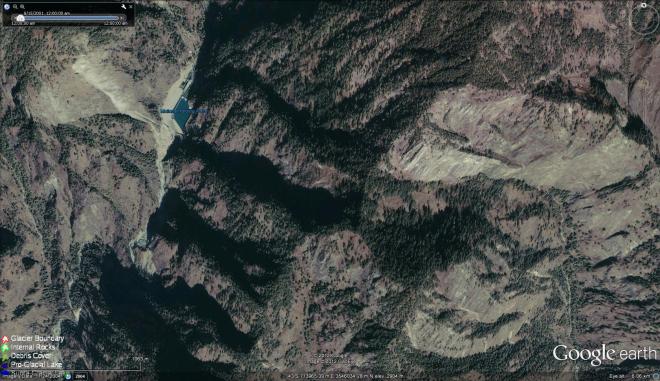 Google Earth image below Larji dam indicating low streamflow near Markanda Temple.
The Malana Glacier flows south from Mt. Indrasan and Mt. Deotibba and has until the last few years turned west where the Manala valleys turns and the Malana Glacier used to join the South Manala Glacier flowing north to this junction point. Here we look at Landsat imagery from 1998, 2000 and 2011. In 1998 and 2000 the glacier turns the corner and begins the western descent to its terminus purple arrow, the narrow tongue of blue in both cases is evident heading west, though further in 1998. There is a prominent bedrock knob, yellow arrow at the western turn on the east side of the glacier. By 2011 the lower 600 meters of the glacier below the western turn has melted away and the glacier now ends at the prominent knob, yellow arrow, there is no tongue of glacier ice turning west. Just above the terminus one significant tributary, green arrow, that had been joined to the glacier during the first ascents in the region in the 1960’s had separated by a short distance in 1998 and 2000. In 2012 this distance has increased as the former tributary also retreats.

The Google Earth imagery from 2004 also indicates the glacier turning the corner and descending 400-500 meters ending at an elevation of 3900 meters. A closeup of the terminus indicates the thin uncrevassed nature in 2004 suggesting that this section was largely stagnant and melting away. The 2004 terminus is indicated with green dots and the 2012 terminus with yellow dots. 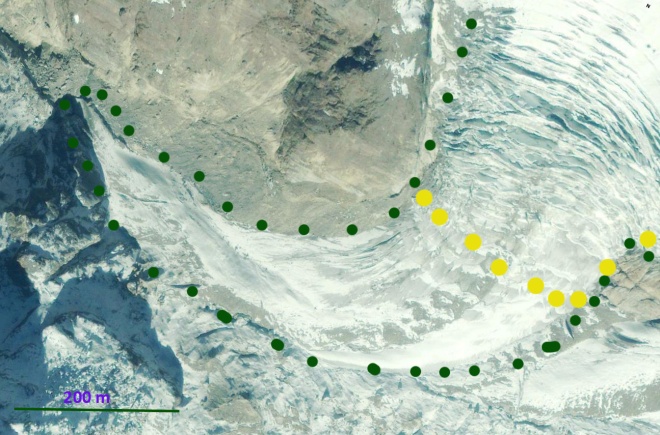