Lednik Karaugom Glacier is a large 13 km long, valley glacier in the Caucasus Mountains of Northern Ossetia, Russia. The glacier drains into the Urukh River which joins the Terek River and then flows into the Caspian Sea. This post compares Landsat imagery from 1986, 2010 and 2012, an image from the USGS in 2002 and Google Earth imagery from 2009. This glacier has experienced a general retreat like all the glacier draining north from the Caucasus Mountains. USGS, (2010) Satellite Image Atlas of Asia, noted that nearly all of the 65 glaciers examined in this region experienced significant retreat from 1987-2004, noting a retreat of Karaugom of 600 m. Maria Shahgedanova, has an ongoing project examining Caucasus glaciers. Shahgedanova et al, (2009) noted a 8 meters per year average retreat rate for the 1985-2000 period. The glacier retreat has led to an increase in debris cover and an increase in the number of proglacial and supraglacial lakes. (Stokes et al , 2007) This glacier begins at the Russia-Georgia border and extends up to the base of Gora Uilpata at 4200 meters. There is a substantial icefall separating the accumulation zone above 3500 meters from the ablation zone of the valley tongue beginning at 2500 m. 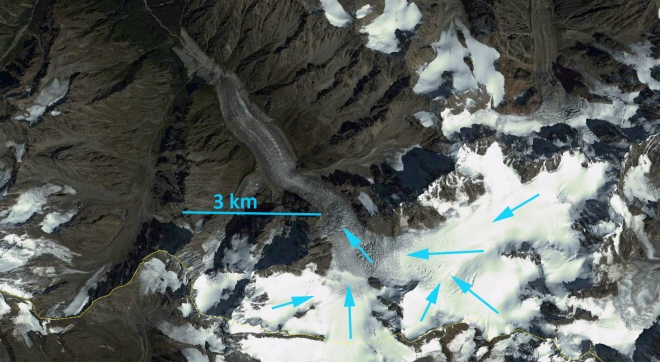 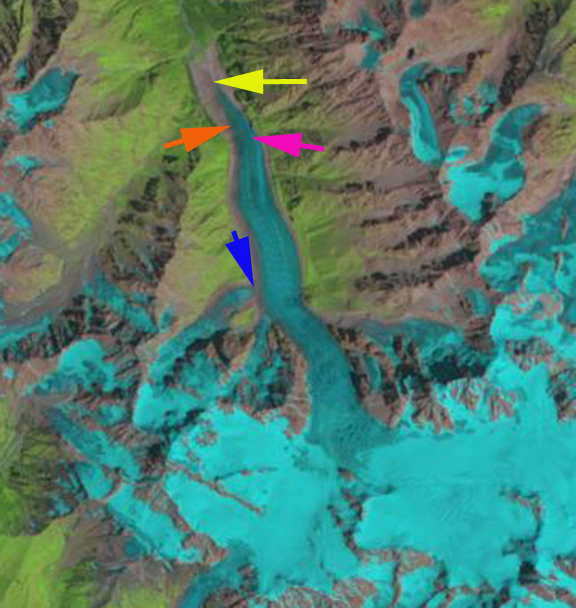 A closeup of the terminus indicates the amount of debris cover, and the formation of ogives at the base of the icefall. The lateral moraine marking the previous ice surface elevation is also noted with a green arrow. This glacier remains vigorous in its flow, with substantial crevassing and ongoing crevasse formation. The retreat is ongoing but the end of the glacier is not stagnant, though the lower 300 meters has reduced crevassing and width. The degree of crevassing at the green arrows at a small icefall 300 meters above the terminus indicates both ice thickness and flow and suggest that the retreat will likely be reduced in the near future. The behavior is similar to that of Lednik Fytnargin and Irik Glacier on Mount Elbrus