Glacier de la Grirose (Girose) is one of the most travelled glaciers in the Alps. It is part of the Les 2 Alpes ski resort, used primarily for summer skiing. The main glacier serviced by a lift is Glacier Mantel just to the west of Girose. 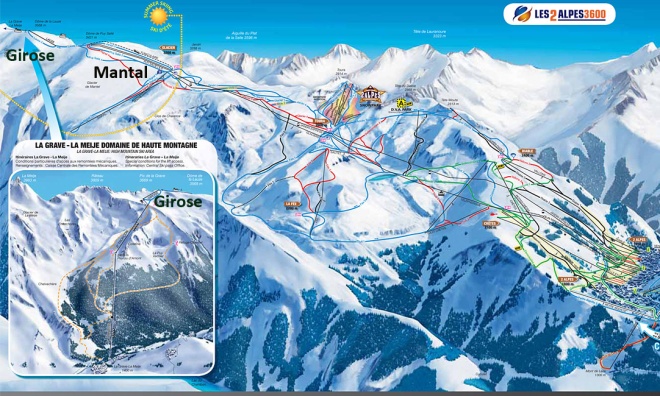 Despite the frequent visits to the glacier by skiers it has not been the focus of much study. The glacier is smaller than often visited but seldom skied Mer De Glace, similar to Glacier Blanc 15 km south and larger than the Grande Motte at Tignes ski area. Here we examine changes from 1984-2012 using Landsat images, Google Earth images and two photographs. Girose has three termini from west to east labelled A-C. The 1985 terminus location is marked by red arrows, the 2003 terminus is indicated by a purple line, the 2009 terminus by an orange line adn the lip of a key icefall here the middle branch (B) separates from the main branch (C). In 1985 this icefall lip is 500 m above the terminus. The two western termini A and B both extend well below the main icefield of Girose in 1985, by 2012 the tongues barely extend beyond the main glacier. The views of the terminus are in order a 1984 photograph, a 1985 Landsat, 2003 Google Earth, 2010 Google Earth and 2012 Landsat image. They are all viewed from the north. Retreat from 1985 to 2010 has been 420 m at terminus a, 500 m at terminus B and 350 m at terminus C. The overall rate is 15 meters/ year. 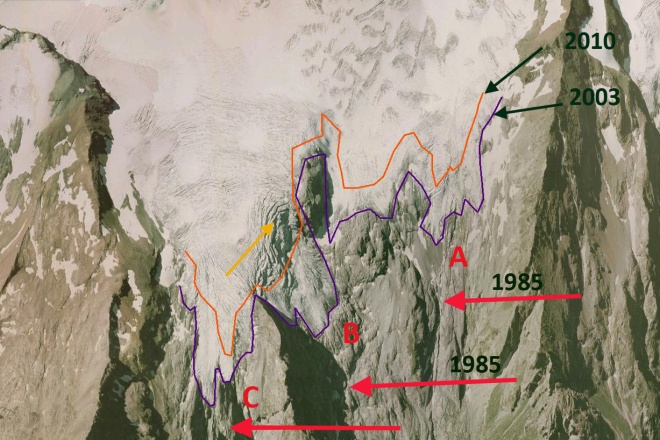 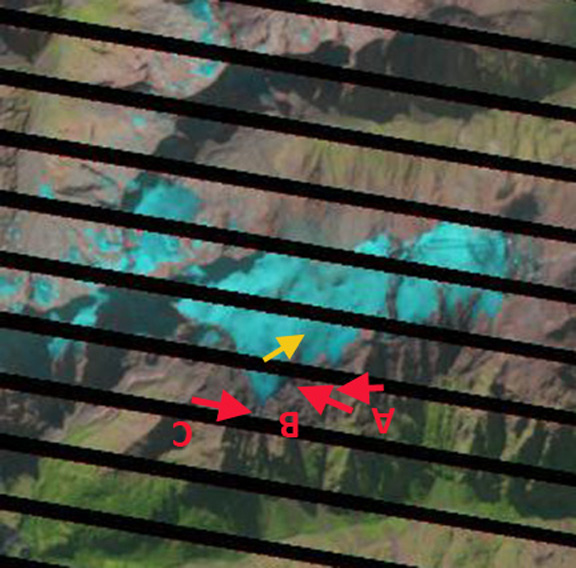 Of greater concern is the expansion of outcrops amidst the accumulation zone of the glacier from 2003 to 2010. This indicates thinning in the accumulation zone, which indicates the lack of a persistent snowcover even for many regions high on the glacier. The two images below identify three locations, at A and B the expansion of bedrock is evident. The scale is the same, at point A the rock outcrop is no longer a narrow linear feature. At Point B the rock outcrop is much longer. At point C there is a sharp reduction in crevassing, and the glacier surface is quite dark colored, this is not a rock amidst the glacier, instead the dark area indicates a portion of the glacier surface that has persistently lost its snowcover and where dirt at the surface has been preferentially enriched. This helps speed thinning, but in the former accumulation zone is a sign it is no longer an accumulation zone. The ski season is supposed to extend from mid- June to Sept. 1 for Les 2 Alpes on the glaciers, in many recent years the season is cut short on Girose.