In a recent study by Tobias Bolch et al (2010) in the western Nyainqêntanglha Mountains glacier area decreased by −6% between 1976 and 2001 and continued to shrink during the period 2001–2009. Li et al (2010) examined glacier change over the last several decades in China and found ubiquitous glacier retreat and commonly lake formation as glaciers retreated. In this case we compare Landsat images from 1988, 2003 and 2010 and Google Earth images from 2011. In 1988 the lakes at the end of the two glaciers are indicated by pink arrows form the main terminus the eastern glacier, and black arrow for the smaller western glacier. By 2003 there is limited terminus change for the main terminus. The western terminus has retreated 200 meters. By 2010 the terminus tongue is breaking up for the eastern glacier terminus. By 2011 the lake has expanded from a length of 600 meters in 1998 and 1300 meters in 2011. The western terminus has retreated another 100 meters. A closeup view in Google Earth of the eastern tongue indicates that this lake will quickly develop to an area of 1.7 km long and 0.8 km wide. Notice all of the icebergs in the lake. This glacier remains heavily crevassed and has a vigorous accumulation zone indicating that it is not in danger of disappearing with current climate. 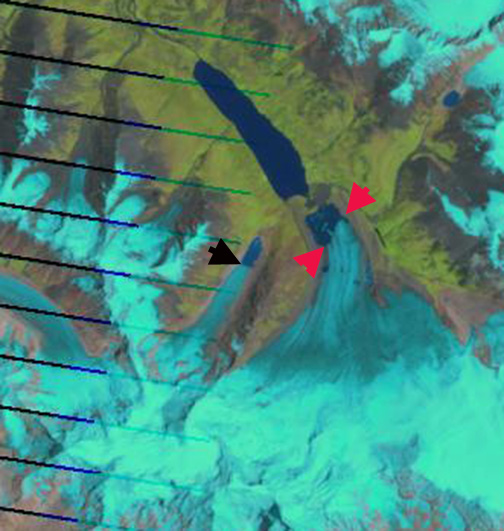 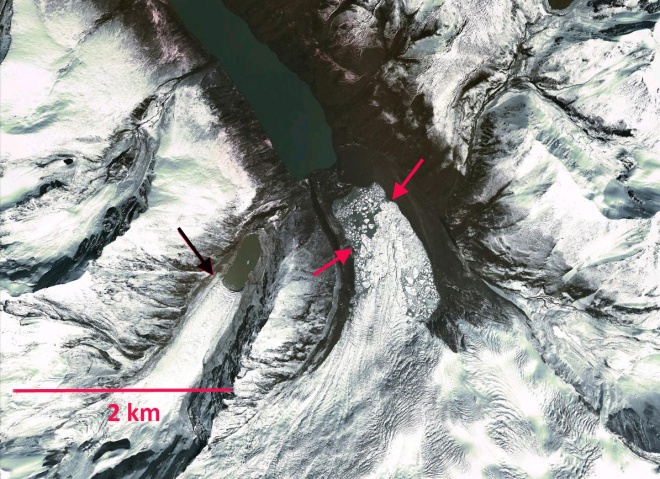 The formation of lakes at the end of the glaciers is quite common. If we look 10 km east of Supa Kangri are two more developing lakes that we will focus upon later. All of the lakes are in the 4700 and 4800 meter elevation range. The lakes are also common features of retreat in the main Himalayan range for retreating Tibetan glaciers, Reqiang Glacierand Menlung Glacier 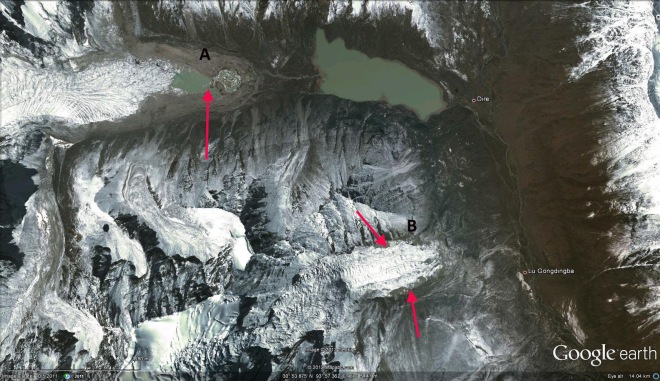