Nevado Cololo is a glaciated mountain area in the Cordillera Apolobamba of northwest Bolivia. Here the focus is on a glacier draining west from the Nevado Cololo into the Rio Suches and then Lake Titicaca. The glaciers of the Apolobamba have lost 48% of their area from 1975-2006 (Hoffmann, 2012). Hoffmann and Weggenmann (2012) have observed both the extensive retreat, new lake formation, and the problem of glacier lake outbursts in this region, which is part of the Apolobamba Integrated Natural Management Area. The glacier that is our focus has developed a new lake at its terminus since 1988, the glacier begins at 5700 m and ends at 4930 m.

. The red arrow in each image indicates the 1988 terminus position which was at the top of a bedrock cliff evident in all images. The yellow arrow is the 2012 terminus position at the base of a second cliff. By 2005 the glacier had pulled back from the cliff exposing a new lake that is 400 meters across. The glacier still ends in the lake. By 2012 last two images, the glacier has retreated several hundred meters from the shore of the lake and ends at the base of a cliff at 5000 m. The glacier should rapidly retreat to the top of this cliff. The retreat from 1988-2005 was 540 m, the retreat from 2005-2012 has been 280 m. The total retreat over 25 years is 820 m or 33 meters per year. 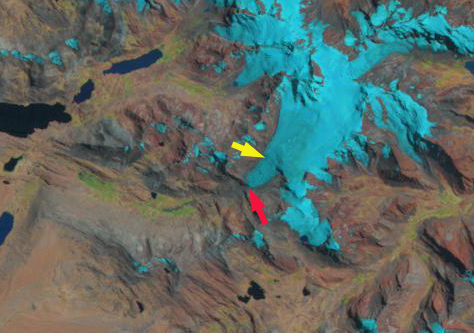 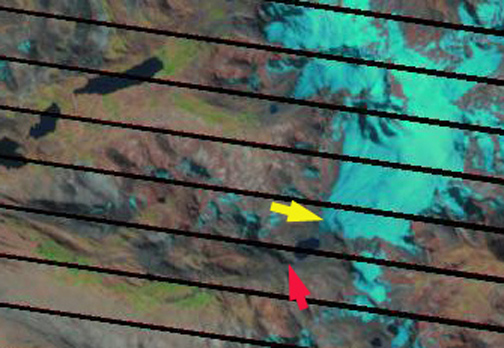 The retreat of this glacier fits the pattern of other Bolivian Glaciers, such as the Zongo Glacieror Laramcota Glacier and tropical Andean glaciers in general (Rabatel et al, 2013).