North Dawes Glacier reached the Endicott Arm as a calving glacier when visited by John Muir in the 1880’s. By 1923 the glacier had retreated a half kilometer and was no longer tidewater. The American Geographical Society under the leadership of William O. Field observed the glacier several times from 1941 to 1961 observing a retreat of 1.8 km from 1923-1961. Here we examine the retreat of the North Dawes Glacier from 1990-2013 and observe some disquieting signs on upper portions of the glacier. The first image is a 1929 image from William Cooper an ecologist from the Univ. of Minnesota of the glacier in 1929 when it was still near Endicott Arm. The second is from Google Earth with the blue arrows indicate the flow direction for the glacier, the lighter blue arrows tributaries that no longer reach the main glacier. 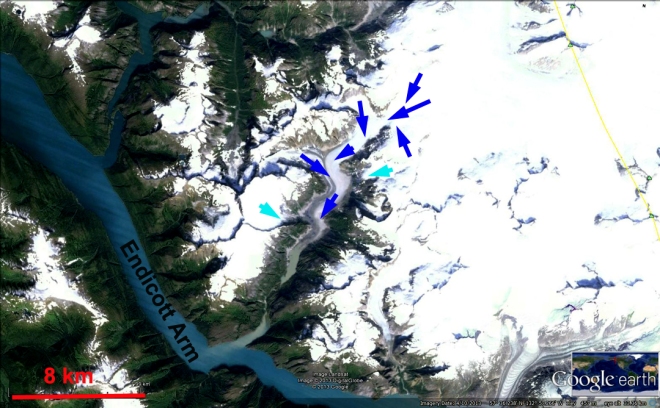 . When I first saw the North Dawes Glacier in 1982 from a plane a small lake had formed at the terminus. In the 1990 Landsat image the glacier ended in a lake that is 1.2 km long, yellow arrow. By 2005 the glacier had retreated another 1.3 km and the lake was long 2.5 km, red arrow. In 2013 the glacier has retreated out of the lake, pink arrow and terminates at a small new developing lake orange arrow. The lake is 2.8 km long, but will likely become shorter as glacier sediments infill the upstream end. There are some stagnant ice cored moraine areas between the 2013 terminus and the lake. The terminus retreated 3.1 km between 1990 and 2013. 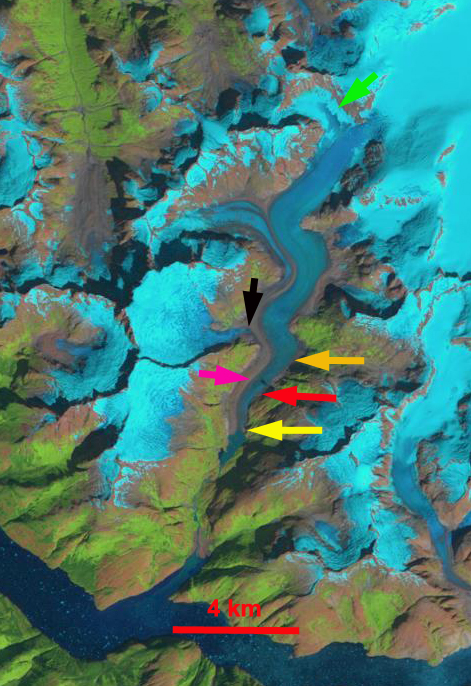 The retreat of the terminus of North Dawes Glacier is the result of diminished accumulation higher on the glacier and increased melt. Two indicators of the impact on the upper glacier is the separation of one of the former tributaries, black arrow, from 1990 to 2013. A second is the tributary higher up on the glacier that was formerly a snowcovered basin feeding the main glacier, green arrow. In 2005 and 2013 it is evident that this basin is no longer a location where snowpack is retained. The result is thinning and exposure of new areas of bedrock, indicating the demise of this tributary even though it is 7 km above the terminus. The basin is mainly at 950-1100 m which is now below the end of the summer snowline (ELA) most years. This glacier is retreating at approximately the same rate as nearby Sawyer Glacier, but is losing a greater percentage of its total area and length. North Dawes is also retreating much more than nearby Baird Glacier.