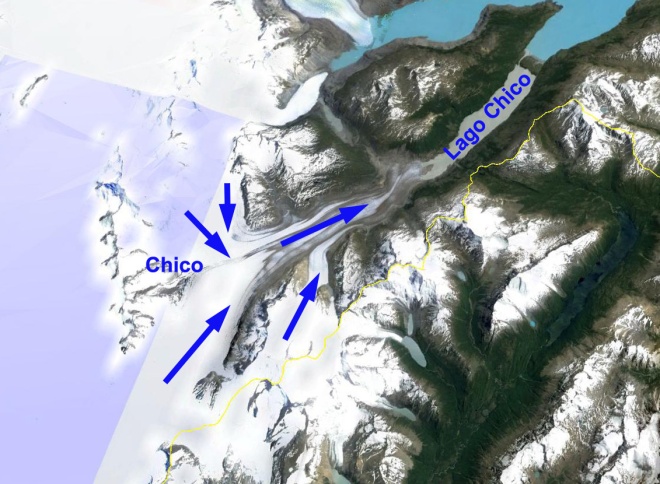 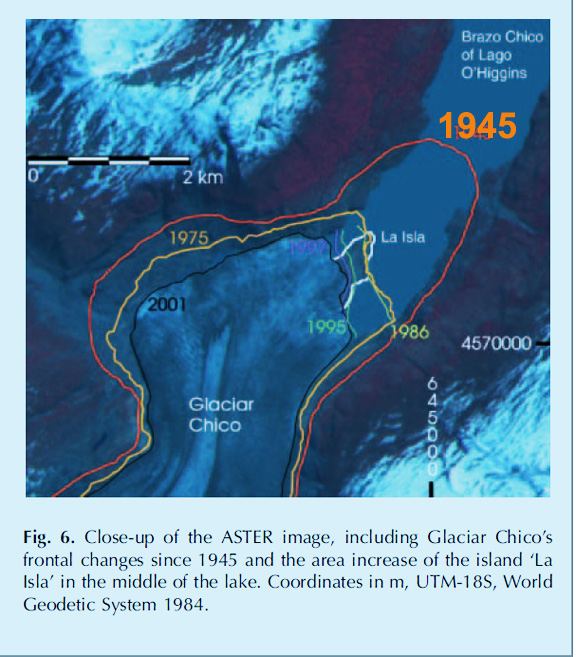 Davies and Glasser (2012). noted that Glaciar Chico’s thinning rates are comparable to other glaciers of the SPI, and the rate of area SPI now shrinking at 20.5 km2 per year. Here we examine Landsat imagery of the glacier from 1986, 1999, 2011 and 2013. In 1986 the glacier terminates near the northern end of a small island in Brazos(Lago) Chico, yellow arrow. A portion of the terminus extends due north to Glacier O’Higgins forming two proglacial lakes, red arrow. The red dot and pink dot indicate the 2013 terminus positions. By 1999 the island is half exposed, a retreat of 600 m. By 2011 the glacier has exposed nearly the full island a retreat of 900 m. The northern margin at the red arrow has also retreated 300 m and the proglacial lakes have now drained. By 2013 at the beginning of the melt season, Glaciar Chico has retreated from the island, and is ending in the lake, though the lake is not likely very deep. The glacier has retreated 1100-1200 meters from its 1986 position. The northern margin has retreated 400-500 meters from its 1986 position. This indicates widespread thinning has continued as Rivera et al (2005) and Davies and Glasser (2012) have indicated would be the case. At the orange arrow 5 km above the terminus the glacier width has decreased by 15-20% from 1986-2013, indicating a continued reduction of flow of ice into the terminus region. The closeup of the terminus from Google Earth indicates a glacier with active crevassing and flow into the terminus region, suggesting that rapid retreat will not ensue. The retreat of this glacier is typical of the other Patagonian glaciers as Davies and Glasser (2012) have so well documented. Examples of the retreat include Onelli Glacier, Jorge Montt Glacier, and Glaciar Steffen 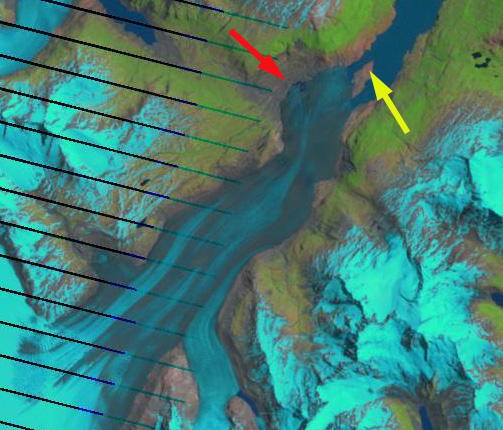