Clara Smith Glacier begins in the Coast Mountains of the British Columbia-Alaska boundary region and descends into Alaska. The USGS map shows the 1948 terminus of the glacier at 2100 feet, blue arrow, 4 km south of the border. 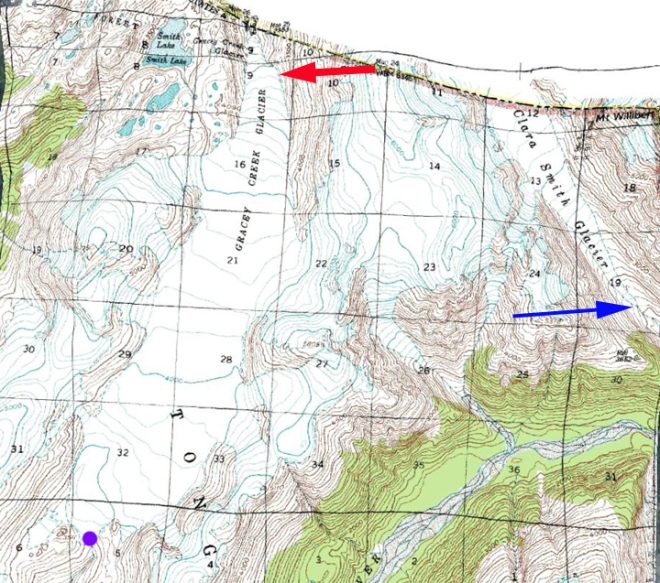 Google Earth images with flow directions.
Here we focus on changes from 1987 to 2013 in Landsat images. The glacier is just east of Gracey Creek Glacier, which in the landsat images below also is marked with arrows, By 1987 the glacier had retreated 1.9 km to the magenta arrow. The glacier was fed by two significant tributaries from the west at the light and dark pink dots. The glacier also has a north flowing terminus marked by a red arrow, the divide between the two is marked by a magenta D. By 1997 the main southern terminus has retreated 400 m since 1987 and the dark pink dot tributary is just separating from the main trunk glacier. In 2010 the dark pink dot tributary is well separated from the main glacier and the terminus is at the yellow arrow. In 2013 the tributary at the light pink dot is only half its width from 1987 and is following the course of the other tributary and will separate. The main terminus is at the yellow having retreated 1000 m since 1987. The terminus is about 1 km south of the border today. The northern terminus has retreated 500 m since 1987 and a small lake has appeared at the terminus, though this could be a temporary feature. In the 1987 and 2013 images the divide between the north and south flowing terminus is marked by a magenta D, the width of the glacier at this point has declined 35-40%, a sign that both termini will continue to retreat with less ice being delivered down valley from the divide region. Notice that in 1997, 2010 and 2013 the snowline is well above the divide even though the images are not at the end of the ablation season. The divide is at 1270 m, a snowline higher than this will not maintain any portion of the main trunk of Clara Smith Glacier. This glacier is experiencing not just substantial retreat of the terminus, but tributary separation, lateral retreat on upper sections of the glacier and thinning in the accumulation zone. This trait is shared by Bromley Glacier, and Gracey Creek Glacier. 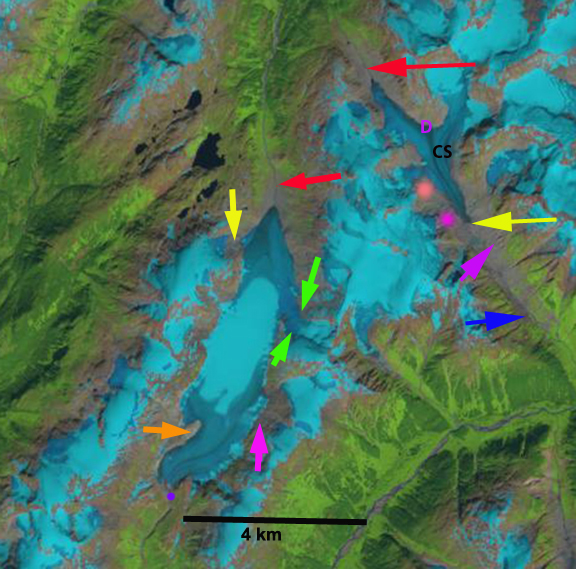