The Wakhan Corridor in Afghanistan is quite remote. A look at maps or Google Earth will indicate the lack of even place names except in the main river valleys. The Secret Compass uses this fact to advantage for expeditions in the region. Here we examine three glaciers north of Sarhad two draining into the Tchap Dara Valley. Haritashiya et al (2009) examined fluctuations of 30 Wakhan Cooridor glaciers from 1976-2003. They found that 28 of the glaciers had retreated.
Here we examine Landsat images from 1998, 2002 and 2013 with the green arrows pointing the 2013 terminus position of the northern glacier, the red arrows to the 1998 terminus position of the center glacier and the yellow arrows indicating the 1998 terminus location of the western glacier. The blue arrows indicate ice flow.

In 1998 the red arrow indicates the terminus of the center glacier, which also has an ice cored medial moraine that extends nearly across the entire proglacial lake that the glacier terminates in. The northern glacier extends beyond the green arrow. The western glacier extends to the yellow arrow filling much of a small basin. In 2002 there is little evident change at the northern glacier. The center glacier has retreated leading to lake expansion, and the medial moraine extending into the lake is also shorter. The western glacier no longer reaches the yellow arrow. By 2013 the northern glacier has retreated 200 meters to the green arrow. The center glacier has retreated 400 m leading to the same amount of lake expansion, the medial moraine no longer extends into the main lake basin. The western glacier no longer reaches a lake that has developed in the basin at the 1998 terminus position. The retreat is 300-400 meters. The retreat over 15 years is substantial for small glacier like this. This parallels the retreat at nearby Zemestan Glacier and the Emend River headwaters glaciers. 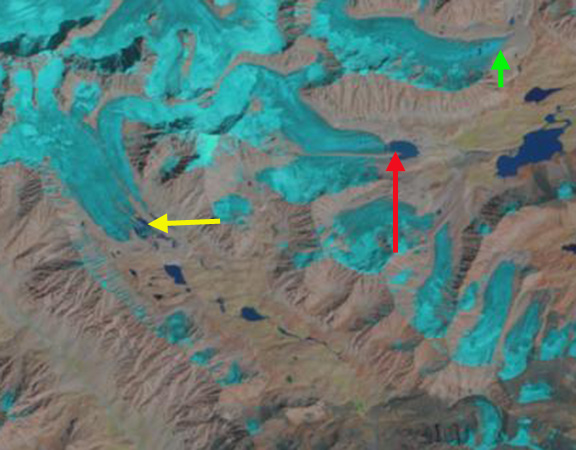 Glaciers of Afghanistan have received little detailed attention for obvious reasons, only satellite image analysis of selected areas has been completed Haritashiya et al (2009) and Shroder and Bishop (2010), both studies noting a significant retreat and downwasting. In this post glaciers in the remote area around Yajun Peak in the Hindu Kush 150 km northeast of Bagram Airbase and 75 km west of the Pakistan Border are examined.

Landsat imagery from 1998 (1st image below), 2010 (2nd image below) and 2012 (3rd image below) are used in combination with 2008 Google Earth imager (Last image below). Changes in three glaciers on Yajun Peak (6024 m) are highlighted. The yellow arrows indicate the expansion of bare rock amid a glacier draining south from Yajun Peak. The expansion of the bare rock area from the terminus area in 1998 to 2012 is evident as is the expanded area of the ridge in the upper glacier noted by the yellow arrow in each image. The magenta arrows indicate the terminus of a glacier draining west from Yajun Peak that in 1998 did not have a lake at the terminus. In the 2008, 2010 and 2012 imagery a small lake has developed as the glacier has thinned and retreated. The third glacier flows northwest and terminates in 1998 at a green line that is a one kilometer long line between two specific topographic points in each image. The glacier has retreated from the green line by 2008 and the retreat is 125 meters by 2012. In the 2008 Google Earth image a purple arrow points out the upper basin of a fourth glacier that is no longer ice or even snow filled. This along with the expansion of the bedrock ridge near the top of the glacier with yellow arrows indicates that even the accumulation zone of these glaciers are not persistently snow covered. Glaciers that lack a persistent snowcover cannot survive (Pelto, 2010). To see the details just click on each image and an expanded version will appear. 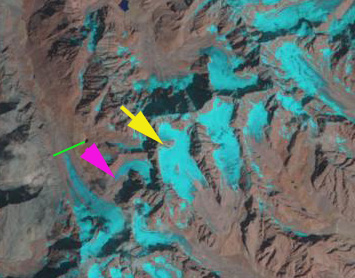 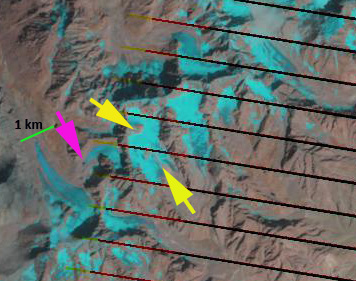 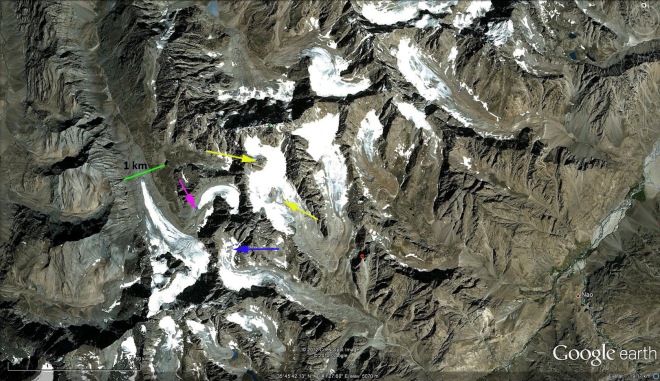 In previous posts on glaciers in the region the Emend Watershed and Zemestan Glacier the retreat is similar.