Glaciar del Humo is in the Mendoza Province of Argentina. It drains into Lago Atuel and is one of the headwaters of Rio Atuel. Rio Atuel has hydropower development above and within the Rio Atuel Canon. The Nihuil dam and reservoir above the canyon and four more dams within the canyon, including Valle Grande Reservoir.
Le Quesne et al (2009) examined the retreat of glaciers in the Central Andes and reported the retreat of Glaciar del Humo as 3200 m from 1914-1948, 700 m from 1948-1970 and 660 m from 1970-2007. Here we utilize Landsat imagery to observed changes from 1990 to 2014.

In each image the red arrow marks the 1990 terminus, the yellow arrow the 2014 terminus and the purple arrow a glacier on the west side of Humo. In 1990 the Glaciar del Humo extended down valley ending at the red arrow at 3200 m. The side glacier ended less than 200 m from the main glacier. By 2000 the terminus had retreated 250 m. In 2003 there is little change from 2000. By 2013 the side glacier is separated by 350-400 m from the main glacier. The snowline is in the main accumulation of the glacier. In 2014 the glacier has retreated 900 m from the 1990 terminus position. The terminus is quite thin indicating that retreat will continue. There is also limited retained snowpack on the glacier in 2014, which would lead to mass losses and ongoing retreat. The retreat of this glacier follows that of others in the region, note maps from Glaciares de Argentina 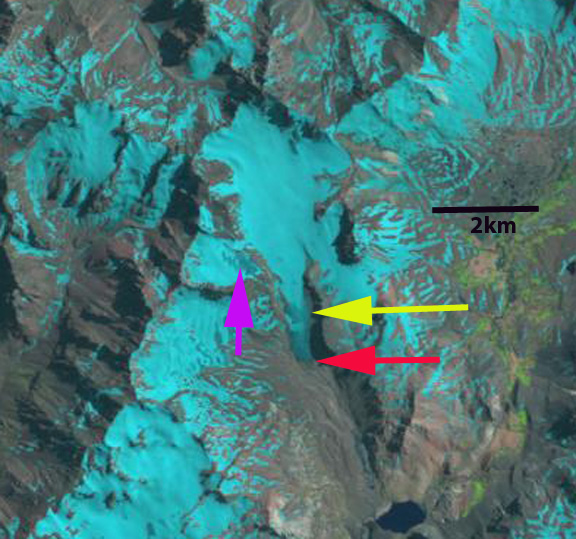 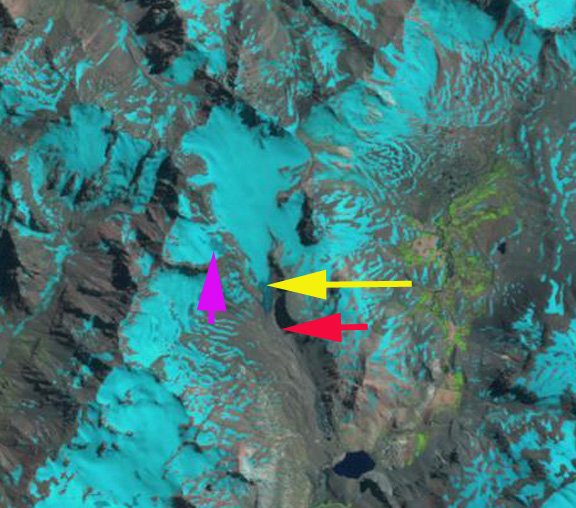 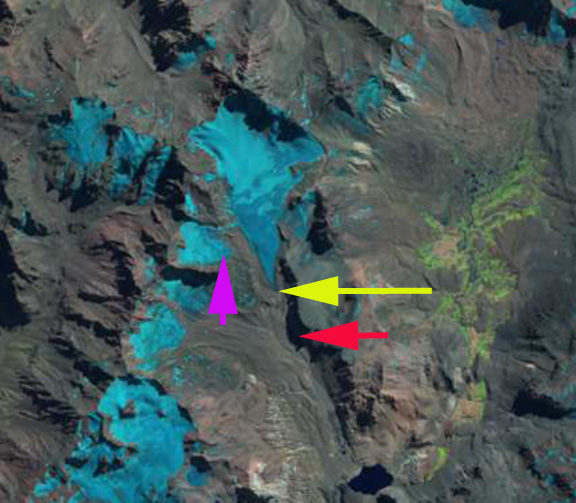 Marconi Glacier, Argentina is one of the more common routes onto the Southern Patagonia Ice Cap (SPI) via Marconi Pass. The glacier is not fed by the ice cap itself, unlike the Glaciar Chico just to the north. The glacier drains into Electrico Lake and Rio Electrico. The good news is despite the name Rio Electrico will not be developed, since it is in Parque Nacional Los Glaciares, Argentina.

Here we examine changes in the glacier observed in Landsat imagery from 1986 to 2012. In 1986 the glacier ends in the valley bottom, without a proglacial lake km from Electrico Lake, yellow arrow. Two neighboring glaciers one ending in a lake, red arrow and one on the valley wall pink arrow are noted. By 2002 Marconi Glacier has retreated 450-500 m exposing a new lake that it terminates in. The snowline blue arrows is at 1100 m. The glacier on the valley wall has retreated leading to a new lake forming, pink arrow. By 2011 Marconi Glacier’s retreat is 800 m since 1986 and it is still ending in the new expanding proglacial lake. The snowline is again close to 1100 m, though this is not the end of the summer. The glacier terminating at the red arrow has now retreated from the lake it ended in. In 2012 Marconi Glacier appears to be close to exiting from the proglacial lake. There is an excellent image of the terminus of the glacier in 2012 from useless conquests, a blog I find useful, that indicates the tenuous connection to the lake. Overall retreat from 1986 to 2012 is 800-850 m.

The pattern of retreat is consistent between these glaciers and the region as noted by Davies and Glasser (2012), who note a 0.15-0.20% area loss per year for the Marconi Glacier and its neighbors that are not part of the main SPI. Davies and Glasser (2012) further note that overall annual rates of shrinkage were far faster from 2001-2011 than from 1870-1986 or 1986-2001. The Argentine Institute of Snow Research, Glaciology and Environmental Sciences has developed maps of the retreat of many of the glaciers from Little Ice Age moraines of SPI that are in Argentina. Each of these indicates a pattern of retreat like Marconi Glacier. Onelli Glacier and Seco Glaciers are other glaciers in the area that retreating. 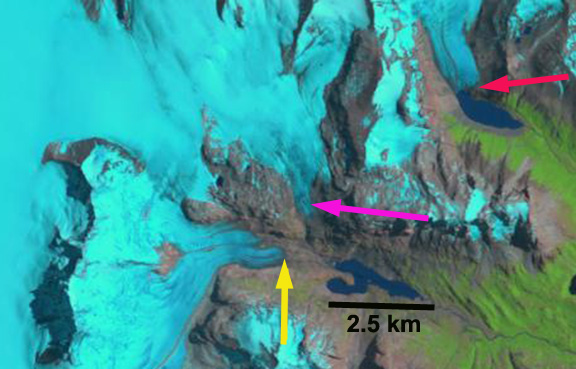 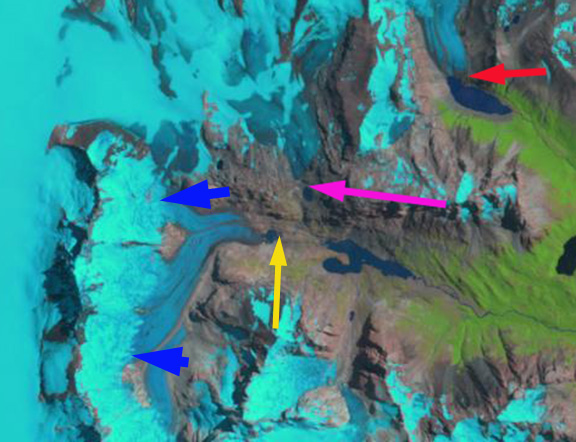 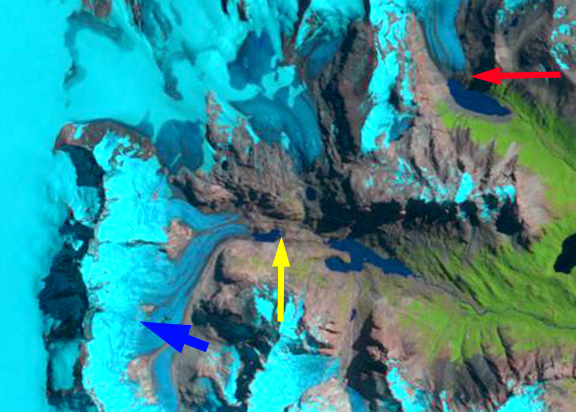 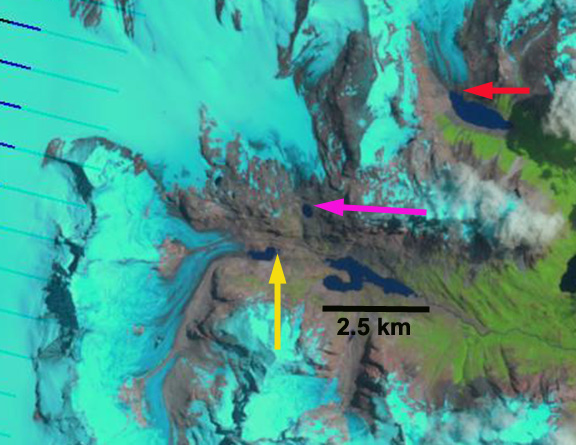 The Onelli Glacier drains eastward from the South Patagonia Icefield into Lago Onelli (LO), which then connects to Lago Argentino (LA). Lago Onelli has three main glaciers termininating in the lake Aggassiz (A), Onelli(O)and Bolados Glacier (B). The glacier is noted as 13 km long with an area of 84 square kilometers by the Labratorio de Glaciologia in Chile . Warren and Sugden (1993) note an 1800 meter retreat from 1945-1992 for Onelli Glacier and 850 meters for Agassiz Glacier. Eric Shipton was the first to visit this glacier and did so in the company of Ohio State glaciologist John Mercer in 1958. They found Lago Onelli so filled with icebergs that little water could be seen (Shipton, Land of Tempest, 1963). Agassiz and Onelli Glacier were observed to have a shared terminus much like Onelli Glacier and Belados Glacier in 2003, ion contact but one flowing into the fjord from the north with a steep calving face, and one from the northwest (Onelli) with a gentler slope. The focus for Mercer was the age of the moraines beyond the glacier terminus, for Shipton hiking up onto the icefield to explore potential avenues to the crest of the icefield. The glacier is located on the icefield base map image from the Glaciares of Argenina website.

. A comparsion of Landsat satellite images indicate the separation and retreat of Bolados (B) and Onelli Glacier(O) from 2000-2010. In 2000 the joint terminus cuts directly across Lago Onelli as one reasonably straight 1.6 km long. By 2003 the glaciers are barely touching and the combined termini are now long 1.8 km long. BY 2008 the glaciers are separated by 1300 meters. The retreat from the 2000 terminus of Onelli Glacier has been 1500-1800 meters depending where on the ice front the retreat is assessed. Theretreat of the last decade of 160 meter/year is a considerable acceleration over the period from 1945-1990. Belados Glacier has retreated 800 meters. The ELA in the satellite images from recent years has been 1300 meters. 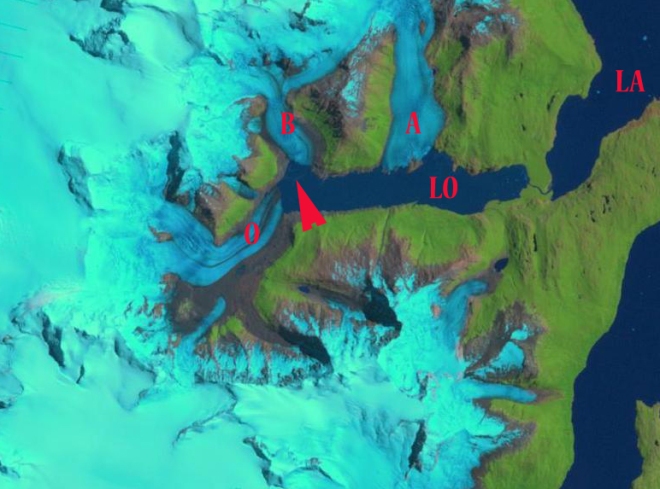