Over the ridge south from Stave Glacier is a 1.5 km long unnamed glacier, that is on the west flank of Galaxy Peak, hence referred to here as Galaxy Glacier. The glacier is in Garibaldi Provinical Park, British Columbia.

Koch et al (2009) in their detailed survey of glaciers in the park chronicled the Park’s glacier retreat from 1952 to 2002. Koch et al (2009) Found that all 45 glaciers are retreating, and Stave Glacier was experiencing its fastest retreat from 1976-1996, with a 750 m retreat. Satellite imagery from 2012 indicates the Stave Glacier retreat rate from 1996 to 2012 is 1600 m or 100 m per year, even faster. Here we utilize Landsat imagery from 1985, 1987, 1992 and 2009, plus Google Earth imagery form 2006 to examine the retreat and separation of Galaxy Glacier. The orange arrow indicates the terminus of the Galaxy Glacier (G) in 1985 where it joined the glacier (P) in the Pukulkul Basin where several lakes have been forming. This basin is just north of Pukulkul Peak. In 1985 Galaxy Glacier and the Pukulkul Basin Glacier are joined at the orange arrow, the red arrow marks the 2009 terminus and the purple arrow indicates the connection to the highest accumulation area on the east slope of Corbold Peak. By 1987 Galaxy Glacier has separated from the Pukulkul Basin Glacier, the latter has an area of 0.45 square kilometers and is larger than the lake it ends in. By 1992 the Galaxy Glacier is separated by 500 meters from Pukulkul Basin Glacier. The area of bare rock at the purple arrow at the top of Galaxy Glacier has expanded. By 2006 the Pukulkul Basin Glacier is gone and a 2.5 km long series of lakes is in its place. Galaxy Glacier has retreated 800 m from the new lake, and 650 meters from its 1985 position. The purple arrow indicates two large rock outcrops effectively ending significant glacier inflow from the upper east slopes of Corbold Peak. By 2009 the Pukulkul Basin Lake has a deeper blue as the glacier input has declined. The glacier is 90% bare of snowcover and the bedrock at the purple arrow has continued to expand. A closeup of the glacier from the 2006 Google Earth imagery indicates exposed firn layers at the blue arrows. This indicates that all the snowcover not just from the most recent winter has been lost but a number of previous winters as well. This is indicative of a glacier that has no consistent accumulation zone and cannot survive (Pelto, 2010). This glacier similar to the nearby Helm Glacier cannot survive current climate. The purple arrows indicate the limited connection to the upper slopes of Corbold Peak. The red arrow indicates the current terminus position. Galaxy Glacier has lost half of its area in the last 25 years, and the 800 m retreat is one-third of its total length. 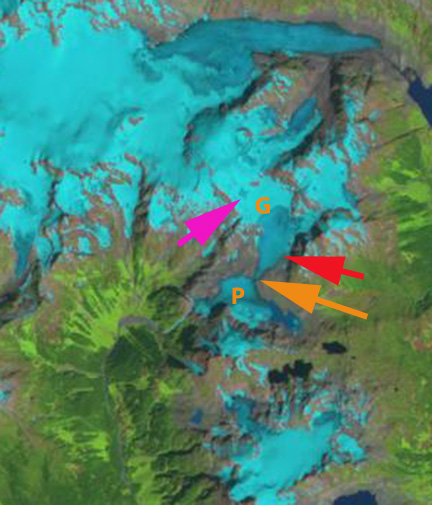 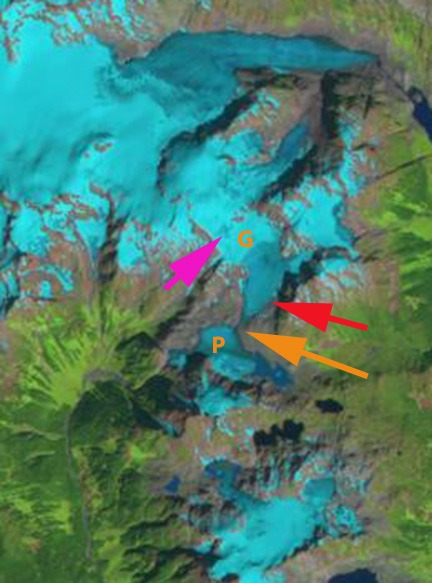 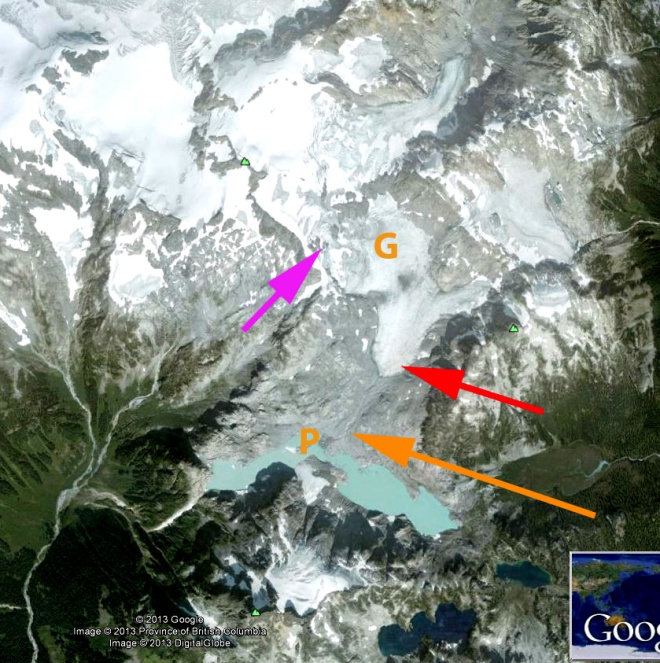 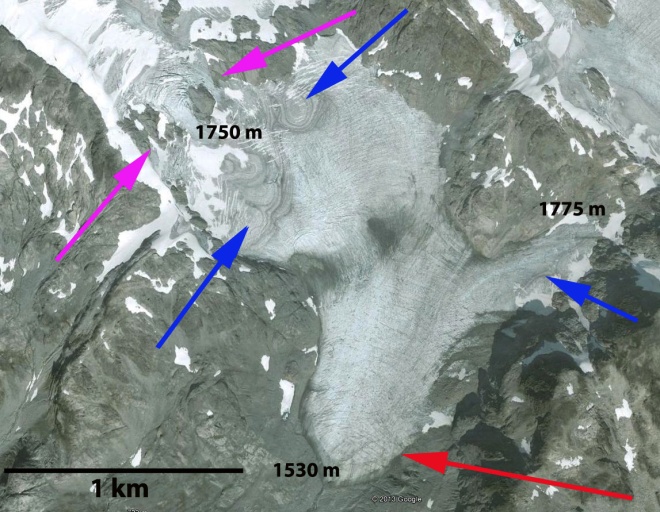 Porcupine Glacier is a 20 km long outlet glacier of an icefield in the Hoodoo Mountains of Northern British Columbia. Bolch et al (2010) noted a reduction of 0.3% per year in glacier area in the Northern Coast Mountains of British Columbia from 1985 to 2005. Scheifer et al (2007) noted an annual thinning rate of 0.8 meters/year from 1985-1999. Here we examine the retreat of Porcupine Glacier and the expansion of the lake it ends in from 1988-2011 using four Landsat images from 1988, 1999, 2010 and 2011. Below is a Google Earth view of the glacier with arrows indicating the flow paths of the Porcupine Glacier. The second images is a map of the region from 1980 indicates a small marginal lake at the terminus. 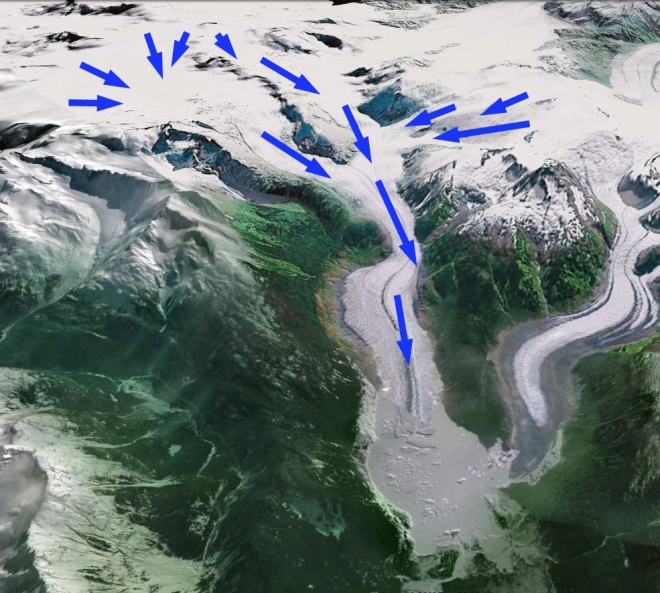 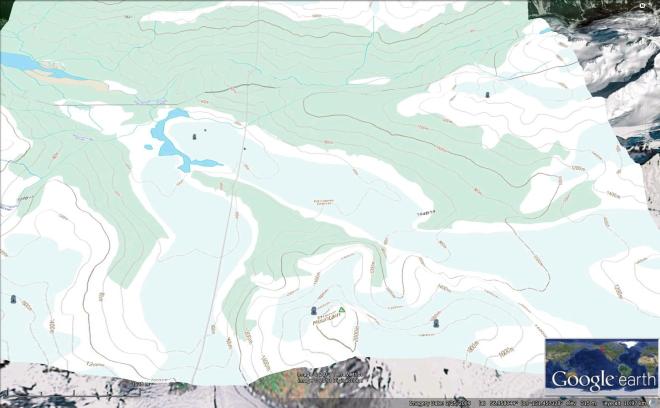 In 1988 a tongue of the glacier in the center of the lake reached to within 1.5 km of the far shore of the lake, yellow arrow. All but the red arrows are in the same location in each of the images below. The orange image is at the 1988 terminus position on the northern edge of the glacier, the purple arrow indicates the 1988 terminus position on the south side of the glacier. The yellow arrow indicates the 1988 center tongue position. The pink arrow is the 2011 terminus position at the north edge of the glacier. The glacier has retreated 2 km in the 22 year period. The number of icebergs in the lake at the terminus indicates the retreat is mainly due to calving icebergs. Glacier thinning of the glacier tongue leads to enhanced calving. The glacier tongue has a low slope up to an icefall, noted by red I, at this icefall the glacier rises from 450 m to 750 m. This is a likely point at which the lake basin ends and the glacier retreat can slow. The retreat of this glacier is similar to a number of other glaciers in the area Great Glacier, Chickamin Glacier, Patterson Glacier and Bromley Glacier. The terminus viewed up close in 2005 has numerous weaknesses indicating the calving that was going to happen in the next several years. 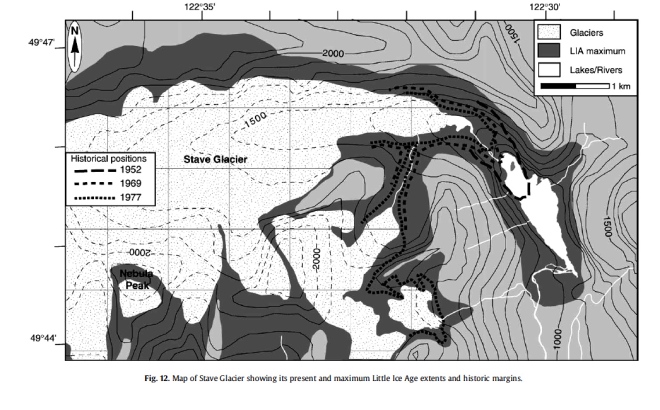 A close up of the terminus in 2006 (top) and 2009 (bottom) indicates the lowest couple hundred meters is thin and uncrevassed indicating retreat will continue. The glacier terminus is at 1275 meters today. There is an active icefall above the terminus at 1500 meters, the snowline has been at 1900 meters. Unlike the nearby Helm Glacier, Stave Glacier has a persistent accumulation zone and can survive current climate. Its behavior is similar to that of Warren Glacier.

The Apex Glacier is part of the Clemenceau Icefield Group in the Rocky Mountains of British Columbia. The Apex Glacier drains into 430 square kilometer Kinbasket Lake impounded by the 1.75 MW Mica Dam.

In a recent paper Jiskoot et al (2009) examined the behavior of glacier in this and the neigboring Chaba Icefield. They found that from the mid 1980’s to 2001 the Clemenceau Icefield glaciers had lost 42 square kilometers, or 14% of their area. During this same period terminus retreat averaged 21 meters per year on the glaciers. In this post we are looking just at Apex Glacier contrasting the mapped extent, 2001 extent and 2010 extent in a Landsat image. A new glacier lake began to form after the 1980’s mapped extent. In the images below the 1980’s terminus is marked with a green line, the 2001 extent in magenta. By 2001 in the Google Earth image the lake is 0.5 km long, in 2010 the lake is 0.8 km long.

2010 Landsat image Apex Glacier’s retreat of 300 m in nine years exceeds 30 meters per year, red arrow 2010 terminus. Hester Jiskoot’s (University of Lethbridge, Alberta) found a retreat rate of 52 meters per year from 1986-2001. The reduced rate of retreat may result from the lake depth being reduced, that the lake is getting a bit narrower hints at this as well. One other interesting aspect is that this glacier is fed by a northern and a southern accumulation zone. The snowline is 2400 to 2500 meters in the 2010 August Landsat image. The remaining accumulation zone is quite small for the northern accumulation zone with another month of melting to go. The ablation zone is between the purple margin and burgundy snowline. The accumulation zone is between the snowline and the green upper limit of the glacier, with the bare rock areas noted with the tan line. In 2013 the glacier has continued to retreat, though the change of approximately 100 m since 2010. In 2013 the glacier lost all but 10% of its snowcover with the snowline at 2700 m, yellow dots. This represents a large negative mass balance that will reinforce retreat.

The result for Kinbasket Lake of the loss of the collective large area is a reduction in summer glacier melt and summer glacier runoff. The annual runoff which will be dominated by annual precipitation would not change just because of the glacier loss as noted in cases like the Skykomish Basin (Pelto, 2011) and Bridge River (Stahl et al 2008).

Spearhead Glacier is just east of the Whistler-Blackcomb Ski area in sw British Columbia and can be reached easily from the top Blackcomb lift. Adjacent to Spearhead is Decker Glacier

. Both glaciers flow northwest and have retreated extensively. Recently both have developed new alpine lakes at their termini that illustrate the recent increase in retreat that could continue thanks to these new lakes. Spearhead Glacier has retreated between 500 and 600 meters since 1928. The glacier lost 62 m in mean thickness since 1928 Koch and others (2009) found. A map of the region indicates the extent of the glaciers in the range from the Little Ie Age and today Osborn and others (2007). The first image is from 2003, the low sloped glacier has few crevasses and end in a gently sloping terminus at the edge of the bedrock basin. Notice in the fall 2008, second image, that a new lake has formed at the terminus Spearhead Glacier. 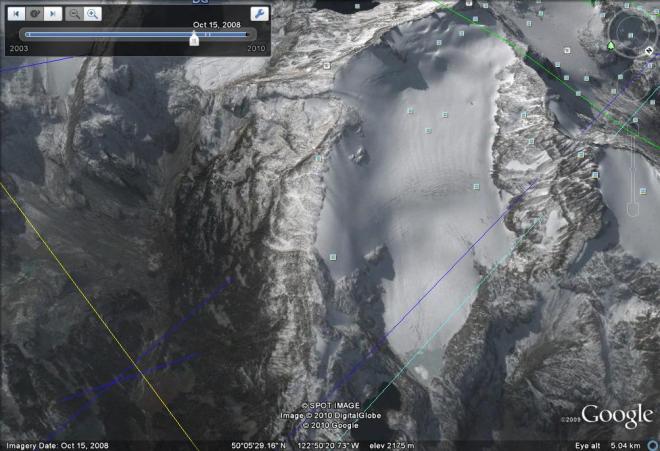 This lake is expanded further in 2009 as seen in this view below across the lake back at the glacier.

This looks much like the expanding lake view and stagnant terminus area of Colonial Glacier in the North Cascades. The glacier is largely confined to a single basin, that suggests the potential for considerable lake expansion as the glacier retreats. There is a step in the glacier in the image above, that indicates the likely maximum extent, notice the bedrock step on the right side of the glacier. Decker Glacier retreat is even more substantial as a percentage of glacier area. illustrated in a comparative image from Osborn and others (2007)

The glacier has also developed a new lake, leading to the breakup of a portion of the end of the glacier, notice the rifted ice pieces in the image below from October 2008. That was not present in the lower image from 2003. This area of broken ice at the end of the glacier and near the image bottom, represents nearly a third of the total glacier area. It is not as apparent as it is in summer conditions when the lake is not frozen over.

It is clear that the business model for glaciers in our current climate is not working. The Helm Glacier in the Coast Mountains of southwest British Columbia is an example of this.  Helm Glacier has been the focus of annual mass balance surveys since 1967. During the 1984-2013 period its mass balance losses have been the greatest of any of the 16 glaciers monitored in North America. The mass balance loss has been about 32 m of water equivalent, about 35 m of ice thickness lost. This is less than losses on other nearby glaciers like Spearhead Glacier but more than others such as Warren Glacier. The regional volume loss has impacted even the large glaciers Bridge Glacier and small glaciers. The loss is more than 30% of the Helm lost in just 25 years, and the trend mirrors that of all glaciers in the Pacific Northwest. Helm Glacier also fits into the pattern of glacier retreat across Canada, Canadian Glacier Retreat index.

The glacier had an area of 4.3 square kilometers in 1928. Today the area has declined by 78% to 0.92 square kilometers. In 1928 the glacier is not too distant from its Little Ice Age moraines. The trimlines of recently deglaciated terrain are clear. The glacier has two termini, one draining north and the other west. Today in the picture from Johannes Koch, there is a vast expanse of newly deglaciated terrain that as yet lacks significant vegetation. The western terminus is gone.
Remainder of post and updates moved to
Helm Glacier