The Imja Glacier is in the Khumbu Range of Eastern Nepal’s Himalaya, just
southeast of Mount Everest. The glacier drains the east slopes of Lhotse, south slope of Penghatse and west slopes of Baruntse before flowing past the southern slope of Island Peak to terminate at Imja Tsho glacial lake. Imja Tsho formed after 1960 due to glacier retreat and is continuing to expand today. 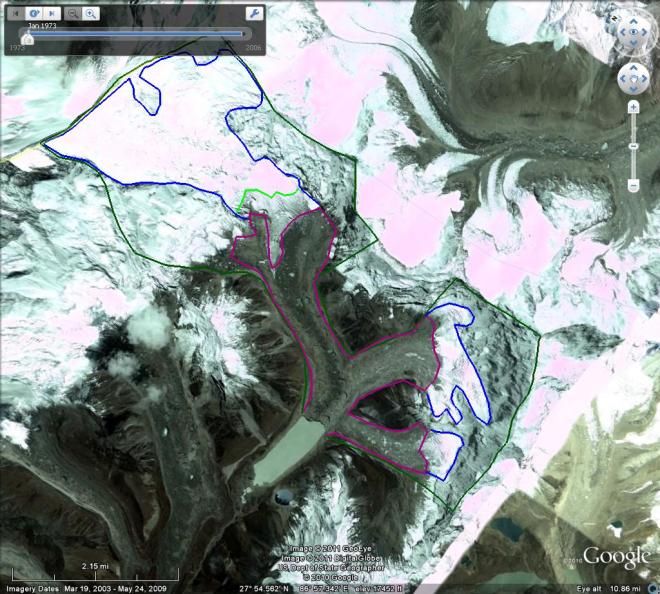 A study by ICIMOD (The International Centre for Integrated Mountain Development, 2008) documented that all 22 glaciers observed in the Dudh Khosi Basin have retreated since 1976 with the minimum retreat being 10 meters/year and the maximum 59 meters/year
The Imja Glaciers is two valleys east of the more famous Khumbu Glacier which has been retreating at a slower rate of 15-20 meters/year. Imja Glacier like its neighbors can be divided into four key sections that each have a different mass balance impact and climate sensitivity.
1)Debris Covered Zone-The portion of the Imja Glacier comprises 35-40% of the glaciers area. The debris cover if thin can enhance melting, but in most area the debris cover is thick enough to insulate the glacier and reduce melting. The debris is brought down onto the glacier by avalanches and accumulates at the surface as the snow and ice the debris mingles with is melted away. This area has plenty of debris and is not impacted by black carbon deposition.
2)Transition Zone-this is the zone between the debris cover and the dry snow accumulation zone. This zone encompasses the snowline which is 5400-5600 meters on Imja Glacier. This is zone of bare ice and snow that experiences melting and can be impacted by black carbon deposition. On Imja Glacier this zone comprises 15 to 20% of the glacier’s area.
3) Avalanche slope zone. There are many unglaciated slopes that are a mixture of rock and snow. They are too steep to hold sufficient snow to form a glacier and most snow cover avalanches onto the glacier below. Though not part of the accumulation zone of the glacier, these slopes are a key feeder to the glacier. Since the avalanches relocate snow from high elevation to low elevation they are a key feature that makes Imja Glacier susceptible to precipitation at elevations above 5500 meters.
4) Accumulation zone-This is a dry snow zone above 5800 meters of perennial snow cover. The snow is dry indicating the lack of melting. A unique aspect of the Himalayan glaciers on the southern flank of the range is that the melt season coincides with a principal accumulation season of the summer monsoon. The summer monsoon causes nearly daily snowfall from June-August that is retained above 5800 meters. The new snow prevents the glacier from being susceptible in this area to black carbon deposition. In the image below the debris covered zone is outlined in purple, the snowline in the transition zone is shown in lime green, accumulation areas are outline in blue and the entire area that feeds the glacier is outlined in dark green. The areas that feed the glacier, that are not part of the glacier do so by avalanching. 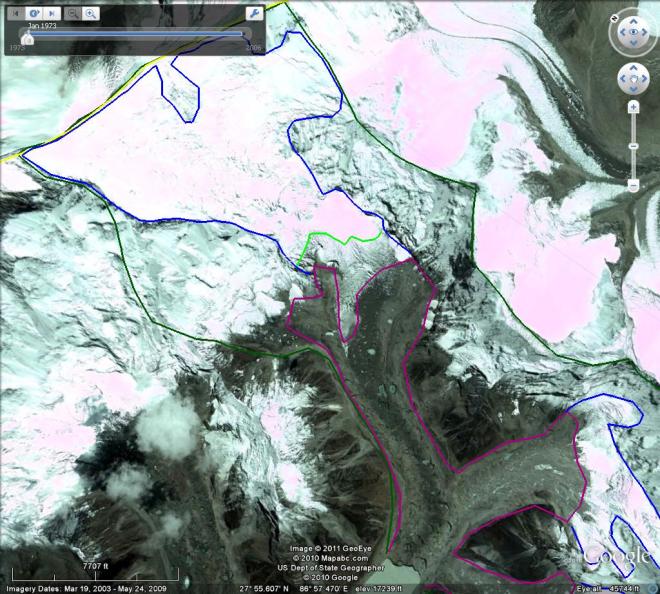 The lake is of concern since the moraine that dams it is not stable. It can melt down and erode slowly or it can lose height more quickly resulting in a glacier dammed lake outburst. The level of the lake has been relatively constant in recent years, but is monitored to forecast this potential hazard. ICIMOD has collected satellite images of the lake expansion from 1962-2008. 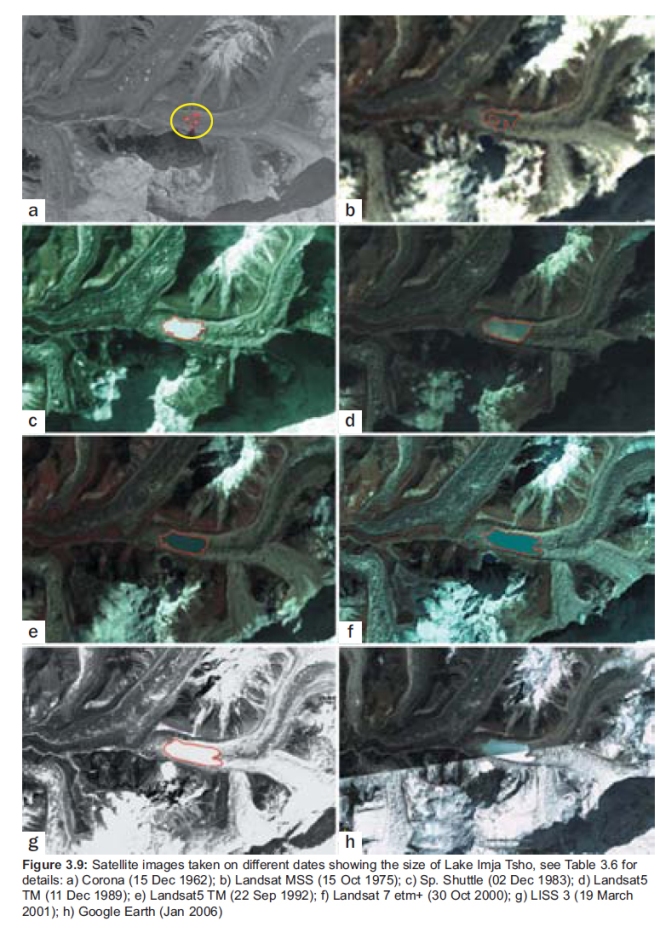