The southern flank of the Caucasus Mountains is in the nation of Georgia. Ten kilometers southwest of the Lednik Karaugom Glacier, Russia from the previous post is Kirtisho Glacier a 4.5 km long valley glacier, a small subglacier KS is also examined in this post. 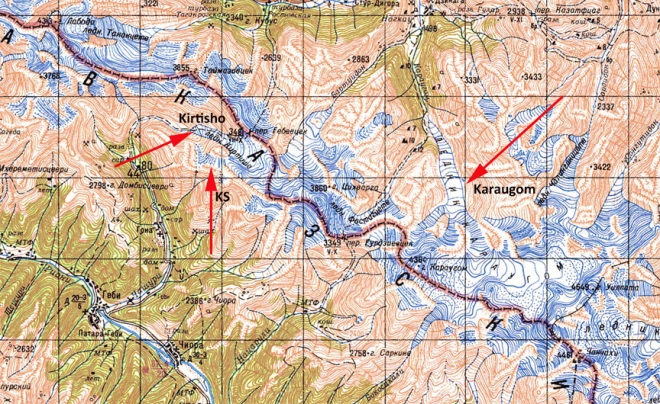 The glaciers in the Causcasus Mountains have been undergoing a significant retreat, the USGS, (2010) Satellite Image Atlas of Asia, noted that nearly all of the 65 glaciers examined in this region experienced significant retreat from 1987-2004. Shahgedanova et al, (2009) noted a 8 meters per year average retreat rate for the 1985-2000 period. To get a feel for the terrain watch the trailer for the On the Trails of the Glaciers- Caucasus 2011. The video does not show Kirtisho Glacier but does indicate the nature of the terrain. This is a project of an Italian group Macromicro, that had contacted me about an upcoming expedition to Alaska in 2013. Landsat images from 1986 (second image) and 2012 (third image) along with 2011 Google Earth imagery (top and bottom image) are shown below. Kirtisho Glacier has a top elevation of 3700 meters and a terminus that in 2012 is at 2600 meters, and was 2400 m in 1986. The snowline has typically been at 3300 meters, blue arrow, which is too high to sustain the terminus at 2600 m. The terminus position in 1986 is indicated by a red and yellow arrow that are also used in the 2012 imagery and the 2011 terminus closeup. The magenta arrow in the Landsat images indicates the beginning of a separation from an northern tributary, which is close to the snowline. The terminus itself is not crevassed in the lowest 400 meters, suggesting retreat will continue for this nearly stagnant section. KS the small glacier to the south, has decreased in area from 0.45 km2 in 1986 to 0.20 km2 in 2012. We also examine this more below. 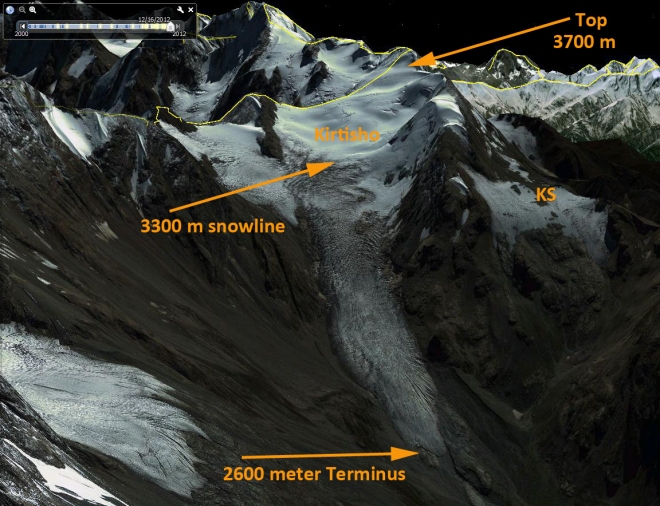 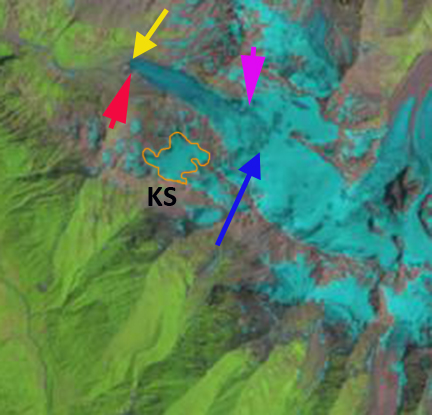 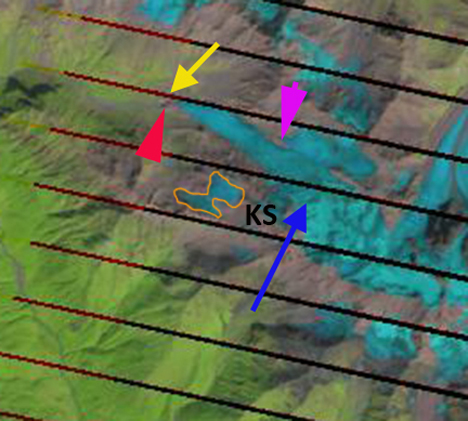 The KS glacier viewed up close is quite thin, with limited crevasses. The red arrows indicate rock protruding through this glacier in many locations. These rocks indicate how thin the ice is, and will help absorb heat and hasten melting as the rock outcrops expand. In 2011 and in the 2012 imagery there is no remaining snow on the glacier. A glacier without a persistent accumulation zone cannot survive (Pelto, 2010). KS glacier will not survive much longer.