Pablo Zenteno in the Dept. of Geography at the University of Chile has called attention to Hariot Glacier is a close neighbor to Fleming Glacier draining the west side of the Antarctic Peninsula into Marguerite Bay. Both glaciers used to feed the Wordie Ice Shelf before it disintegrated between 1970 and 2000. Unlike the Fleming Glacier, Hariot Glacier has a steeper gradient as descends down a a mountain valley to the sea. The glacier is 6 kilometers wide in this valley. The glacier descends from 1500 m to 50 m as it passes through the valley. The tongue of this glacier has suffered a large loss since 2005. The 2005 Google Earth Image indicates a 50 square kilometer floating tongue beyond the grounding line, at the grounding line rifts developed on the west side of the glacier tongue. By 2009 in the Landsat 7 image overlain the floating tongue is gone. This retreat has been part of a progression that is illustrated by Zenteno (2010) 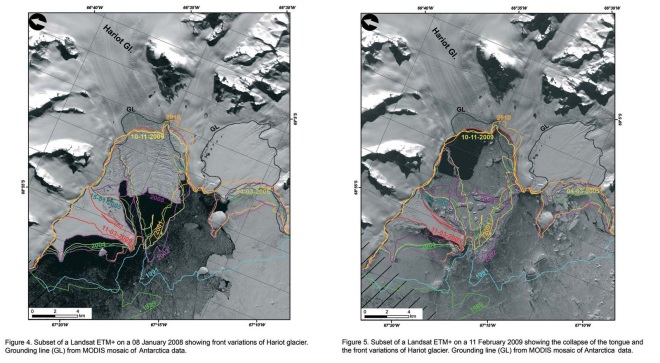 . The spread of rifts have been noted as a sign of weakness in ice shelves note Fleming Glacier and Petermann Glacier. A closeup view of the rifts at the grounding line in 2005 that mark the inland point of the glacier tongue loss in 2009 indicate that the rifts extned 25% of the way across the glacier tongue. The amount of crevassing in the glacier tongue is unusual for a floating Antarctic Ice Shelf. Crevassing indicates acceleration which does not occur typically once a glacier is afloat. The crevassing either represents crevasses that developed before the section was afloat or an unstable floating section due to acceleration from the loss of the Wordie Ice Shelf.