Recent observations indicate that the Fleming Glacier on the Antarctic Peninsula which used to feed the Wordie Ice Shelf is accelerating and thinning even faster(Wendt et al, 2010) This is leading to the production of numerous tabular icebergs from the glacier front as seen below from a 2009 Google Earth image. 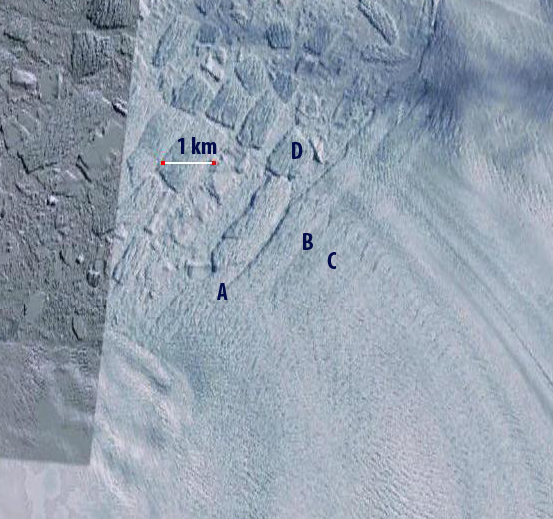 . A is a rift that is also the ice front toward the upper right. B and C are rifts that will produce future tabular ice bergs. D is an iceberg with an area of just under 1 square kilometer. Wordie Ice Shelf was the northernmost large Ice shelf on the western AP. The ice shelf disintegrated between 1970 and 2000. From an area of 1900 km2 in 1970 to 100 km2 in 2009 as mapped by the British Antarctic Survey. The first image is from the BAS in 1989. Followed by a series of maps illustrating its demise put together by the BAS and USGS

The breakup was suggested to have occurred due to a warming trend in the region that began in the 1970’s generating meltwater . There is also thinning and weakening around some of the pinning points where the ice shelf was grounded. This is similar to observations from Wilkins Ice Shelf.
The Wordie Ice Shelf was fed by several major tributary glaciers including the Fleming Glacier.
(Rignot and others (2005) used satellite radar interferometry to observe changes in behavior of Fleming Glacier from 1995 to 2004 identifying a 40-50% increase in glacier velocity from the terminus to 50 km above the terminus and a two meter per year thinning. More recent Airborne thickness data indicate thinning has increased to 3 or 4 m per year in the lower reach of the glacier during the 2004-2008 period (Wendt et al, 2010). Rignot and other (2005) further observed that 6.8 ± 0.3 km3/yr of ice, which is much larger than snow accumulation of 3.7 ± 0.8 km3/yr. This imbalance has certainly increased with acceleration.
Without the presence of a thick, slow moving ice shelf buttressing the Fleming Glacier it has accelerated. Below is a map from Wendt et al (2010) showing the Fleming Glacier former margins. Below that is Google Earth Image showing the nature of the calving front. Notice the tabular ice bergs that have and are about to break off. Below that is an image further up glacier, a nunatak has appeared in mid glacier that is not evident in the 1989 image. 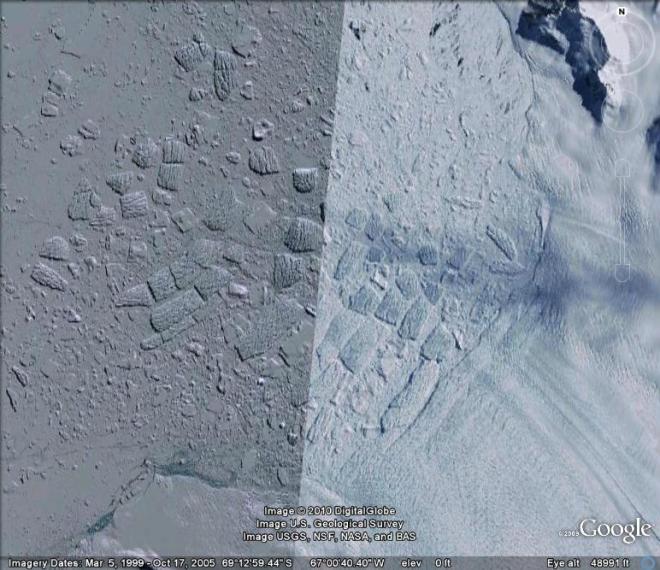 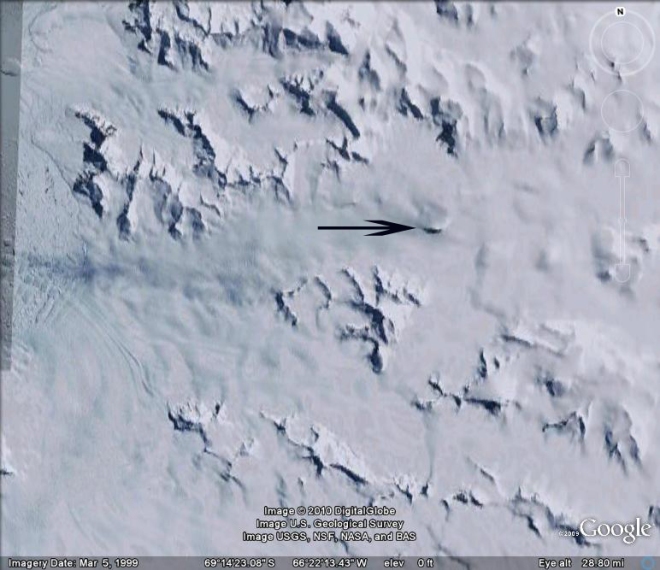 As observed for the Jakobshavn and Pine Island Glacier thinning leads to reduced buttressing and increased glacier flow.